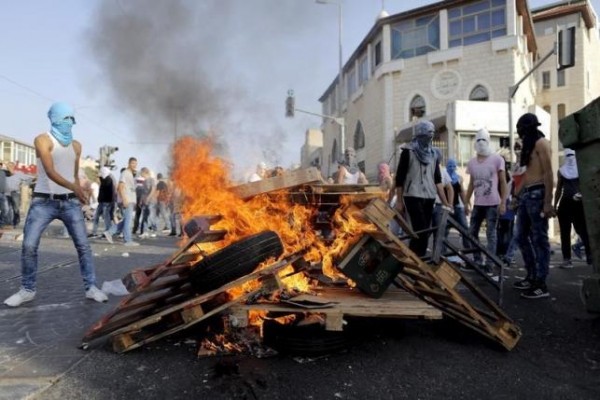 Palestinian protesters stand next to a fire during clashes with Israeli police in Shuafat, an Arab suburb of Jerusalem October 5, 2015. REUTERS/Ammar Awad
Share:

Israel announced harsher measures to tackle Palestinian violence on Monday as a Palestinian teenager was killed in a clash with Israeli soldiers near the West Bank town of Bethlehem, a Palestinian hospital source said.

Violence in the Israeli-occupied West Bank and Jerusalem has intensified in the past few weeks and the teenager’s reported death was the latest in a series of incidents that has raised fears of wider escalation.

A Bethlehem hospital said a 13-year-old boy identified as Abdel-Rahman Abeidallah of the nearby al-Aidah refugee camp died of a bullet wound to the heart.

The Israeli military said it had no specific information.

Recent bloodshed has included a drive-by shooting that killed an Israeli couple in the West Bank on Thursday and an arson attack that killed a Palestinian toddler and his parents in July.

Israel said it had arrested five men from the West Bank city of Nablus on suspicion of carrying out Thursday’s drive-by shooting.

Late on Monday, Prime Minister Benjamin Netanyahu convened his security cabinet, a close circle of ministers, to authorize the harsher measures to tackle the rising violence in East Jerusalem, which includes the walled Old City, and the West Bank, areas that Israel captured in a 1967 war.

In broadcast remarks before the meeting, Netanyahu said Israel would respond strongly “against terrorism and against inciters”. He said four more army battalions had been deployed in the West Bank and thousands of police had been stationed in Jerusalem.

“The police are going deeply into the Arab neighborhoods, which has not been done in the past. We will demolish terrorists’ homes. We are allowing our forces to take strong action against those who throw rocks and fire bombs,” he said.

But settlers and right-wingers were unimpressed and thousands protested near Netanyahu’s official residence in Jerusalem to decry the government’s “lack of resolve” in fighting Palestinian attacks and ensuring their safety.

In Gaza, Sami Abu Zuhri, the spokesman for Islamist Hamas, which runs the coastal enclave said Israel’s harsher measures would not manage “to switch off the protests”.

Tensions have been inflamed in particular by frequent clashes between Palestinian stone-throwers and Israeli security forces at Jerusalem’s al-Aqsa mosque compound.

Palestinians have said they fear increasing visits by Jewish groups to al-Aqsa, revered by Jews as the site of biblical temples, are eroding Muslim religious control there.

U.S. Secretary of State John Kerry called for calm, saying it was “unacceptable on either side to have violence resorted to as a solution. … That kind of violence is not going to serve anybody’s purpose,” he told reporters during a visit to Chile.