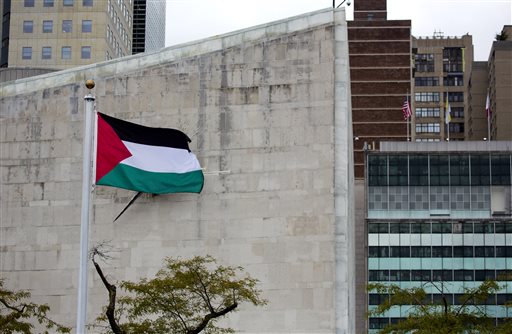 More than 300 ministers, diplomats and well-wishers who crowded into the rose garden at U.N. headquarters where a temporary flagpole had been erected for the ceremony applauded his words.

Among them were the foreign ministers of Russia, Saudi Arabia and Iran and ambassadors from many countries including France. The United States, which does not recognize the state of Palestine, did not send a representative, the U.S. Mission said.

Abbas told the crowd it was an historic moment on the road to Palestinian independence. Palestine was designated as a non-member observer state at the United Nations in November 2012 and Palestinian statehood also has been recognized by many countries across Asia, Africa and Latin America.

As the black, white, green and red flag went up the flagpole, cheers and shouts of “Peace! Peace! Palestine!” erupted.

The Palestinians campaigned for a General Assembly resolution that was overwhelmingly approved on Sept. 10 allowing U.N. observer states to fly their flags alongside those of the 193 U.N. member states. The Holy See and Palestine and are the only two non-member U.N. observer states.

In contrast to the Palestinians, the Holy See flag was raised outside U.N. headquarters alongside flags of the 193 U.N. member states without fanfare or ceremony just before Pope Francis arrived last Friday to address the General Assembly. The permanent flagpole for the Palestinian flag is already in place beside it.

U.N. Secretary-General Ban Ki-moon called Wednesday a day of “pride” and “hope” for Palestinians around the world.

That will lead to the unfurling of the Palestinian flag “in its proper place — among the family of nations as a sovereign member state of the United Nations,” Ban said.