Obama: ‘Syria’s Assad must go’ to ensure IS defeat 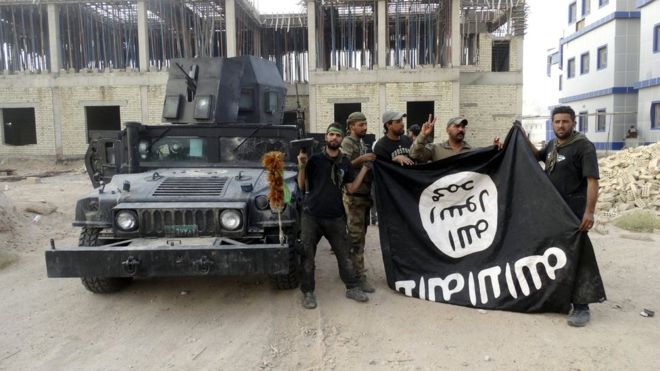 US President Barack Obama has said defeating Islamic State in Syria would only be possible if President Bashar al-Assad stepped down, and that the fight against the group will take time.

He pledged to use all possible tools – military, intelligence and economic – to defeat IS, but acknowledged the group was continuing to expand.

He was speaking at a summit in New York about tackling IS.

Earlier, the US said it was imposing new sanctions on IS figures.

Mr Obama said IS had taken root in Syria and Iraq, and that defeating the group required “a new [Syrian] leader and an inclusive government that united the Syrian people in the fight against terrorist groups”.

“This is not a conventional battle. This is a long-term campaign – not only against this particular network, but against its ideology,” he added.

Speaking at the summit, UK Prime Minister David Cameron said the UK would “continue to support the transition in Syria…that we need to see so badly”.

Also on Tuesday, the US imposed sanctions and penalties on 35 individuals and groups as foreign terrorist fighters – a designation that automatically incurs penalties and aims to cut off their sources of financing.

The individuals targeted come from a wide range of countries in what is seen as an effort to highlight the global nature of the threat from Islamic State, says the BBC’s Barbara Plett Usher in New York.

Two British nationals are on the list. One is named as Nasser Muthana, originally from Cardiff, who admitted in an IS video that he had fought in battles in Syria.

The other is Sally Jones, the wife of an IS hacker killed recently in a US drone strike in Syria.

A US Congressional report released on Tuesday says more than 25,000 foreign fighters, including at least 4,500 Westerners, have joined IS and other militant groups in Syria and Iraq.

Most foreign fighters come from Tunisia, Saudi Arabia and other Arab countries, but there is an increasing number of Europeans too – and more than 250 Americans.

The report says several dozen of them have made their way back to the US.

Russia, which is president of the UN Security Council for the month, will chair its own meeting on Wednesday on countering extremism.

On Tuesday, Russia criticised the US counter-terrorism summit at the United Nations, calling it disrespectful.

Separately, France’s foreign minister said Russia had talked a lot about striking IS, but had not yet taken any concrete action against the group.

“You have to look at who is doing what. The international community is striking Daesh [IS]. France is striking Daesh. The Russians, for the time being, are not at all,” Laurent Fabius told a news conference in New York.

On Monday, Mr Obama met Russian President Vladimir Putin on the sidelines of the UNGA to discuss the Syrian war.

The US and Russian leaders have long differed on Syria. The US and France say Syria’s President Bashar al-Assad must go, while Russia has been a staunch ally of the regime in Damascus and has recently stepped up military support.

More than 250,000 Syrians have been killed and a million injured in four-and-a-half years of armed conflict, which began with anti-government protests before escalating into a full-scale civil war.

More than 11 million others have been forced from their homes, four million of them abroad, as forces loyal to President Assad and those opposed to his rule battle each other – as well as jihadist militants from IS. Growing numbers of refugees are going to Europe.

How has the world reacted?

Regional and world powers have also been drawn into the conflict. Iran and Russia, along with Lebanon’s Hezbollah movement, are propping up the Alawite-led government. Turkey, Saudi Arabia and Qatar are backing the Sunni-dominated opposition, along with the US, UK and France.

A US-led coalition has been carrying out air strikes against IS in Syria and Iraq for more than a year.

The UK announced this month it had carried out a drone strike against two British citizens in Syria, but has yet to fly manned operations in Syrian airspace.

Over the weekend, France confirmed its first air strikes against IS targets. A number of other countries, including Australia, Canada and Jordan, have also conducted bombing missions.