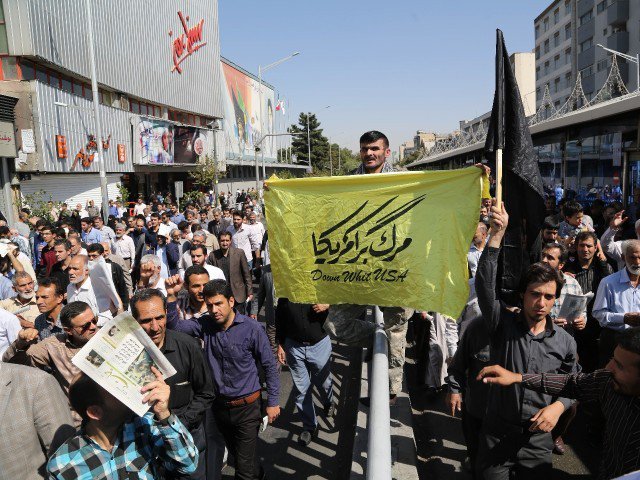 Iranian protesters shout slogans and hold anti-US signs during a demonstration against Saudi Arabia after 131 Iranians pilgrims were killed in a stampede at the annual hajj, on September 25, 2015 at Enghelab square in Tehran. PHOTO: AFP
Share:

Saudi Arabia on Friday suggested pilgrims ignoring crowd control rules bore some blame for a crush that killed over 700 people at the haj pilgrimage in the annual event’s worst disaster for 25 years.

The kingdom’s regional rival Iran expressed outrage at the deaths of 131 of its nationals at the world’s largest annual gathering of people, and politicians in Tehran suggested Riyadh was incapable of managing the event.

Hundreds of demonstrators protested in the Iranian capital, chanting “Death to the Saudi dynasty”.

With pilgrims frantically searching for missing compatriots and photographs of piles of the dead circulating on social media, the tragedy haunted many on the haj a day on.

“There were layers of bodies, maybe three layers,” said one witness who asked not to be named. “Some people were alive under the pile of bodies and were trying to climb up but in vain, because their strength failed and they dropped dead.

“I felt helpless not to be able to save people. I saw them dying in front of my eyes,” he told Reuters.

An Algerian pilgrim told Algeria’s al-Shurouk television: “We saw death: People were stepping over the mutilated bodies in front of you, four or five on top of each other.”

Saudi King Salman ordered a review of haj plans, and Health Minister Khalid al-Falih said an investigation would be conducted rapidly and a final toll of dead and wounded calculated.

At least 863 pilgrims were injured in the disaster, in which two big groups of pilgrims collided at a crossroads in Mina, a few km (miles) east of Mecca, on their way to performing the “Stoning of the Devil” ritual at Jamarat.

The stampede “was perhaps because some pilgrims moved without following instructions by the relevant authorities,” the minister said in a statement.

The kingdom’s critics were likely to see the statement as an attempt to deflect responsibility. Safety during the haj is highly sensitive for the ruling Al Saud dynasty, which presents itself internationally as the guardian of orthodox Islam and custodian of its holiest places in Mecca and Medina.

The effort to uncover the facts and assign blame was likely to grow more acute and possibly more political.

A pilgrim who gave his name as Abu Abdallah said security forces appeared on high alert after the deaths. “What happened is a tragedy and many people … are terrified, but in the end we can only pursue our haj duties,” he said.

Hakim, from Morocco, said: “It is simply scary to hear how people crushed one another. More frightening is that we do not know how it happened.”

The Saudi civil defense service reported on Twitter that a fire had occurred in three storage facilities in Mecca’s al-Maaseem neighborhood, and 10 fire and rescue units were in attendance. No further details were immediately available.

“I ask the Saudi Arabian government to take responsibility for this catastrophe and fulfill its legal and Islamic duties in this regard,” Rouhani said in a statement.

Iranian state television said the demonstrators in Tehran were showing their anger at “Saudi incapability and incompetence to run the haj”.

“The world will not accept excuses like the weather was hot or the pilgrims were disorganized,” Tehran Friday prayer leader Mohammed Emami-Kashani was quoted as saying by Fars news agency.

Iranian pilgrims who survived described Saudi’s response “too little, too late,” according to Iran’s state run Press TV. They said rescuers arrived two hours after the incident and started collecting dead bodies first instead of helping the injured.

Saudi Arabia’s Interior Ministry spokesman Major General Mansour Turki was quoted in Saudi media on Friday as saying the security forces had immediately responded and begun to rescue those who fell in the crush.

“This year’s haj ceremony was disorganized as the Saudi government had hired young and inexperienced people,” Saeed Ohadi, Head of Iran’s haj and pilgrimage organization told Iran’s state broadcaster in a live interview from Mecca.

Former Iraqi Prime minister Nuri al-Maliki, an ally of Iran and foe of Riyadh, said the incident was “proof of the incompetence of the organizers”. He said the haj should be placed under the authority of the Organization of Islamic Cooperation, the world’s largest Muslim organization.