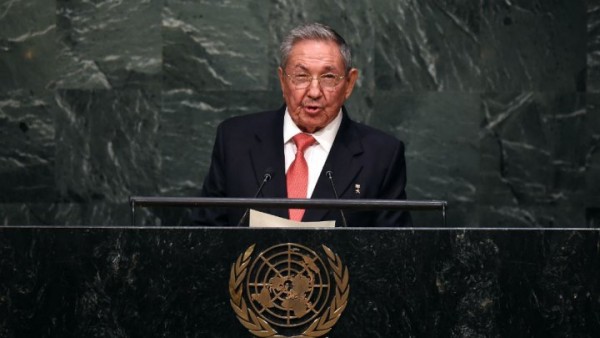 Cuban President Raul Castro on Saturday took aim at the US embargo against his country, describing it as the “main obstacle” to his country’s economic development.

“Such a policy is rejected by 188 United Nations member-states that demand its removal,” Castro told a UN development summit, referring to a UN resolution calling for the end of the decades-old embargo.

The UN General Assembly has voted each year since 1982 to approve a resolution calling on the United States to lift the embargo against Cuba, which has been in place since 1960.

Making his first visit to the UN, Castro hailed the re-establishment of relations with Washington as a “major progress,” but stressed that the embargo was unfinished business.

“The economic, commercial and financial blockade against Cuba persists, as it has been for half a century,” said Castro, who succeeded his brother Fidel as president in 2006.

Cuba estimates that more than $121 billion in damage has been inflicted on its economy from the embargo, which was imposed in retaliation for Cuba’s nationalization of US properties on the island.

Since the rapprochement with Cuba, President Barack Obama’s administration has expressed support for lifting the embargo, but the decision rests with Congress, where a Republican majority opposes the move.

The General Assembly is set to discuss a new draft resolution condemning the embargo at a session next month.

This year, however, Cuba will introduce a resolution that “welcomes” the reestablishment of relations and acknowledges Obama’s determination to work with the US Congress to lift the embargo, Cuban Foreign Minister Bruno Rodriguez has said.

More than 160 world leaders are arriving in New York for the UN development summit, followed by the UN General Assembly debate opening Monday.

Castro is due to speak again on Monday, a few hours after Obama takes the podium.