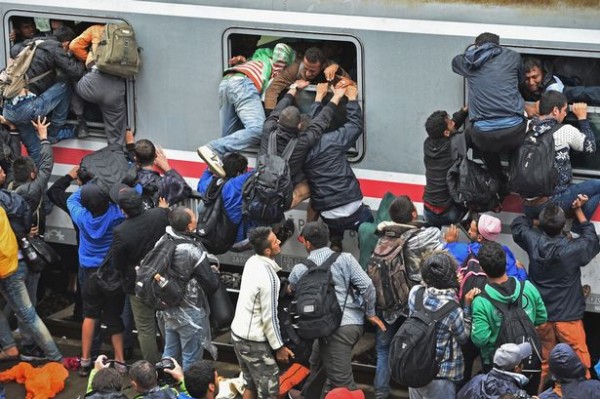 Sept. 20, 2015 Migrants desperately try to board a train heading for Zagreb from Tovarnik station in Tovarnik,Croatia. Croatia continues to send buses and trains north to its border with Hungary. Jeff J. Mitchell/Getty Images
Share:

EU leaders pledged at least 1 billion euros ($1.1 billion) for Syrian refugees in the Middle East and closer cooperation to stem migrant flows into Europe at a summit described as less tense than feared after weeks of feuding.

Chairman Donald Tusk said the meeting, which ended early on Thursday after seven hours of talks in Brussels, was “really excellent, for sure much better than we expected”.

He heard “very substantial and energetic” exchanges between the Austrian and Hungarian leaders, whose common border was among those disrupted by chaotic crowds of migrants this summer, but not the mutual recrimination that has threatened to tear apart the bloc’s cherished passport-free Schengen zone.

“Today’s meeting and this atmosphere are a very positive sign,” said European Council President Tusk, a former prime minister of Poland. “It’s quite a symbolic moment for me as it’s clear we have stopped this risky blame game.” German Chancellor Angela Merkel, criticised by some eastern neighbours for what they saw as actions that have fuelled the influx of people trying to reach Germany, voiced satisfaction: “We know that the problem is not solved with the decision taken. But we have taken one of many necessary steps. I got the feeling that we want to tackle this task together.”

Held at short notice after governments fell out badly over a scheme to share out responsibilities for asylum-seekers around the EU, the summit carried political rather than legal weight. A joint statement read: “We can only manage this challenge by working together in a spirit of solidarity and responsibility.”

Among short-term actions before the next regular summit in mid-October, the EU would offer at least 1 billion euros more to the U.N. refugee agency UNHCR, its World Food Programme and other agencies and increase funding for Syrian refugees in Turkey, Jordan, Lebanon and other countries—part of a broad push to ease factors driving Syrians to risk sailing to Europe.

“It is close to the scene of the tragedy that the refugees must be kept, welcomed, supported,” said French President Francois Hollande, renewing a call for global cooperation by wealthy powers to take in some of the most needy cases.

As part of efforts to win cooperation from Turkey, locked in a long love-hate relationship with Europe and host to some 2 million Syrian refugees, Tusk and EU chief executive Jean-Claude Juncker will host President Tayyip Erdogan on Oct. 5.

The summit set a November deadline for Greece and Italy to have EU-staffed “hotspots” in place to register and fingerprint new arrivals and start a process of relocating Syrians and others likely to win refugee status to other EU states and deporting those regarded as unwanted economic migrants.

That is a demand of Germany and France but also of ex-communist states like Hungary, the Czech Republic and Slovakia which fought against being obliged to take a share of asylum-seekers but were over-ruled in a rare vote on such a sensitive issue at a ministerial meeting on Tuesday.

The accords may do little to ease the immediate chaos and tension which has flared, for example between old Yugoslav foes Croatia and Serbia, or to slow the rafts reaching Greek islands from Turkey.

“The measures we have agreed today will not end the crisis,” Tusk said. “But they are all necessary steps in the right direction … Tonight we have a common understanding that we cannot continue like we did before. Without changing the current paradigm the Schengen area will only exist in theory.”

Establishing a principle of “relocating” some asylum-seekers has been a key demand of Italy in particular, which wants to end a rule that states they should remain in the first EU state they enter. Northern countries accuse Italy and Greece of undermining the Schengen area by simply letting migrants move on unchecked.

Italian Prime Minister Matteo Renzi said a package of EU-run relocations and deportations and EU-funded frontier forces meant Rome’s partners had finally accepted demands it has been making for years to spread the load of migrant arrivals by sea.

Hungarian Prime Minister Viktor Orban gave a robust defence of the razor-wire fencing he has erected to keep out migrants; he insisted he was only following EU rules and said that if Greece could not defend its borders, Athens should ask for help.

On a visit to Germany earlier in the day, Orban accused Berlin of “moral imperialism” for encouraging Syrian refugees to try and reach the German frontier. But in Brussels he said he would not criticise Germany whom he praised as a valued partner.

Orban’s Slovak ally, Prime Minister Robert Fico, said he would challenge in EU courts the imposition of quotas on states for taking in 120,000 asylum-seekers from Italy and Greece. “We have been refusing this nonsense from the beginning, and as a sovereign country we have the right to sue,” Fico said.

Collectively, national leaders were chided by the executive European Commission when it named 19 countries for breaches of EU asylum laws. The Commission, among proposals adopted at its weekly meeting on Wednesday, also called on them to reverse cuts in their funding for the World Food Programme.

Overall, Juncker said, the EU had doubled the funds targeted to deal with migration to 9.5 billion euros.