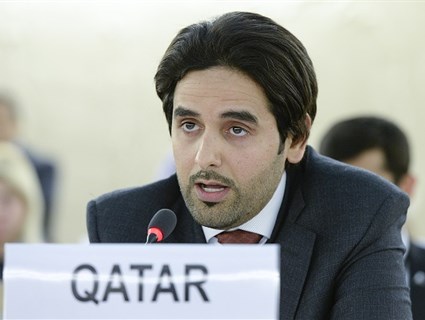 Geneva – Qatar renewed its confirmation that the Assad regime bears responsibility for violations, crimes and humanitarian tragedies in Syria.

This came in a speech delivered here on Monday by Qatar’s Permanent Representative to the United Nations and other organizations in Geneva, Ambassador Faisal bin Abdullah Al Henzab at the 30th session of the Human Rights Council.

The Qatari Ambassador said that the Syrian people were forced to defend themselves against violence , killings and intimidation in a response to peaceful and legitimate demands of the Syrian people.

He stressed that the Syrian regime is committed to  terrorism and works to create sectarian strife and an environment that helped in emergence and spread of terrorist and extremist groups such as ISIS group and others.

Al Henzab strongly condemned all violations committed by the regime in an attempt to spread chaos and instability in Syria and in the region, citing that the Assad regime long ago lost legitimacy before its people and the international community.

Qatari UN envoy emphasized that the departure of Assad regime is the first step towards implementation of the Geneva 1 statement and formation of a transitional governing body with full executive powers, which will provide an opportunity to build a new Syria.

He noted that the Assad regime is still committing the most heinous massacres against Syrian people such as Douma market massacre which killed nearly 111 civilians , hundreds injured including women, children and elderly men.

Al Henzab concluded his speech by calling on the international community, in particular the UN Security Council to skip failure which suffers from it and bears all its legal and moral responsibility to protect the Syrian people and those responsible must be held accountable for crimes and human rights violations in Syria and bring them before criminal justice.