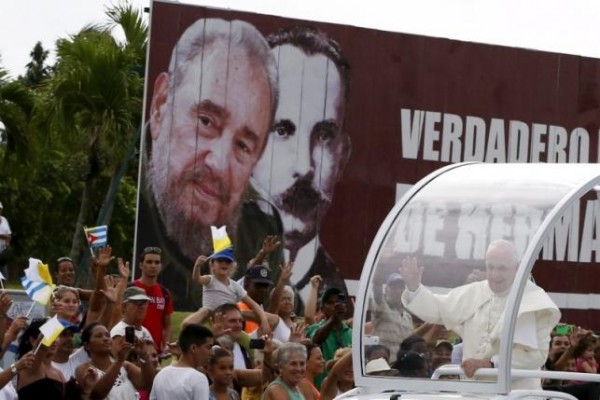 Pope Francis greets believers while he passes in front of a billboard with and image of Cuba’s former leader Fidel Castro (L) and Cuban independence hero Jose Marti, outside the airport in Havana, September 19, 2015. REUTERS/Carlos Garcia Rawlins
Share:

Pope Francis exhorted Cuba and the United States on Saturday to set an example for the world by deepening the recent rapprochement that he helped secretly broker between the former Cold War foes.

His zucchetto skullcap flying off in the Caribbean breeze at the start of a nine-day tour of Cuba and the United States, the Argentine pope used his arrival speech at Havana airport to praise this year’s normalization of diplomatic relations.

“I urge political leaders to persevere on this path and to develop all its potentialities … as an example of reconciliation for the entire world,” he said before riding his open-sided popemobile through roads thronged with well-wishers.

Better sensitized to the issue than predecessors because of his Latin American roots, the 78-year-old pontiff facilitated a back channel for secret talks and sent missives to Presidents Raul Castro and Barack Obama at a delicate stage in 2014.

That bore fruit with a prisoner swap, the opening of embassies, and an easing of some travel and trade restrictions, although a half-century-old economic embargo is still in place, only removable by the U.S. Congress.

Francis is a popular figure in Cuba and thousands lined the streets of Havana as he was driven to the papal nuncio’s home, cheering, singing, and waving Cuban and Vatican flags.

“He brings hope for a better future for Cuba,” said Maria Antonia Iglesias, 65, waving a banner and clapping as Francisco passed by. “Love, peace and more unity is what we need between all Cubans: those who are here and those in the United States.”

As on previous papal visits, Cuban authorities rounded up some political opponents to prevent them from attending events around the visit, a dissident human rights group said.

Among them were three dissidents whose detention kept them from a meeting with the pope, said Berta Soler, leader of the largely Catholic group Ladies in White.

Instead of seeing Francis at the Vatican’s diplomatic residence in Havana, she and dissident leaders Miriam Leyva and Martha Beatriz Roque were in police custody for several hours, Soler said.

“The Holy Father is not going to change anything in Cuba,” Soler said. “We don’t expect much from Francis because he comes here to talk about political matters between Cuba and the United States, not to resolve anything.”

Cuban police detained between 10 and 20 dissidents and a similar number were threatened or warned, said Elizardo Sanchez, head of the Cuban Commission of Human Rights and National Reconciliation.

Raul Castro – who like his brother and former revolutionary leader Fidel Castro was baptized a Catholic and educated by Jesuits – received the pope at the airport after his 12-hour flight from Italy. It was the third papal visit to Cuba in less than two decades.

Castro thanked the pontiff for his help with the U.S. rapprochement, but also used his welcoming speech to criticize Washington’s embargo and its occupation of the Guantanamo naval base on the eastern tip of the Caribbean island.

Cuba, he said, had been a model of internationalism and humanism in past decades. “We have done that while being blockaded, insulted, attacked, with a high cost in human lives and major economic damages.”

Since reaching a historic breakthrough with Castro in December, Obama has come out against the embargo. On Friday, he issued new regulations weakening the embargo for a second time, using his executive authority to circumvent Congress.Despite making Cuba constitutionally atheist and repressing Catholics in the early years after their 1959 revolution, the Castro brothers have relaxed that stance since the 1990s.

In his speech, Francis sent greetings to Fidel Castro, whom he is expected to meet.

While in Cuba, he may well reiterate the Vatican’s opposition to the U.S. trade embargo. But once in the United States, the pope may tread more lightly, aides said, to avoid the appearance of meddling in the web of legislation, interests, and decades-old resentments slowing the pace of change.

Cuba’s Communist Party will welcome any papal criticism of the embargo and may also have to bear a corresponding call for greater political tolerance from in the one-party state.

“I would like my greeting to embrace especially all those who, for various reasons, I will not be able to meet, and to Cubans throughout the world,” the pope said upon arrival.

He was clearly referring to Cuban exiles, who have dispersed to many countries with the most strident anti-communists in South Florida. Some also believed he was talking about critics of the Cuban government who are behind bars.

The pontiff also urged further backing for Catholics “so that the Church can continue to support and encourage the Cuban people in its hopes and concerns, with the freedom, the means and the space needed.”