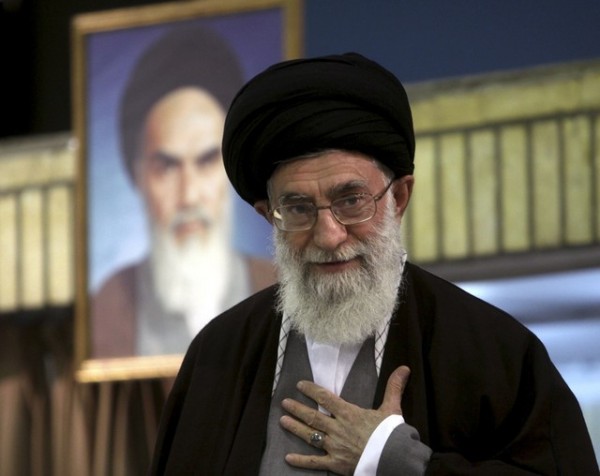 Iran’s highest authority, Supreme Leader Ayatollah Ali Khamenei does stand to benefit from the nuclear deal , thanks to his close control of one of the most powerful and secretive organizations in Iran — “Setad Ejraiye Farmane Hazrate Emam,” or Setad. But he accuses US of creating Iranophobia so no one does business with Iran
Share:

The historic nuclear deal reached between Iran and major world powers has yet to be implemented, but one clear winner has emerged: Iran’s highest authority, Supreme Leader Ayatollah Ali Khamenei.

Khamenei has yet to publicly back the accord, which lifts some sanctions on Iran in return for limits on its nuclear program. But he does stand to benefit, thanks to his close control of one of the most powerful and secretive organizations in Iran — “Setad Ejraiye Farmane Hazrate Emam,” or Setad.

The deal, which is likely to go into effect after clearing a major Congressional hurdle last week, lifts U.S. secondary sanctions on Setad and about 40 firms it owns or has a stake in, according to a Reuters tally based on annexes to the deal.

The delisting of Setad — which has little connection to Iran’s nuclear program but is close to Iran’s ruling elite — feeds into U.S. Republicans’ criticism that the deal will empower Iran’s hardliners and help fund its regional ambitions.

Former U.S. officials say Setad was just one of a slew of entities sanctioned because they were considered part of the Iranian government. One former official said Setad was also targeted because the United States saw it as close to Khamenei and believed that the sanctions might induce him to back serious nuclear negotiations.

With the nuclear deal reached, they say it is now appropriate to remove those measures. Many U.S. sanctions related to Iran’s support for militant groups and alleged human rights abuses will remain in place.

With stakes in nearly every sector of Iran’s economy, Setad built its empire on the systematic seizure of thousands of properties belonging to religious minorities, business people, and Iranians living abroad, according to a 2013 Reuters investigation, which estimated the network’s holdings at about $95 billion.

Iranians who said their family properties were seized by Setad described in interviews in 2013 how men showed up and threatened to use violence if the owners didn’t leave the premises at once.

Iran’s mission to the United Nations did not respond to a request for comment. In response to Reuters’ findings in 2013, a Setad spokesman said at the time the information presented was “not correct,” and did not elaborate.

Reuters found no evidence that Khamenei is personally enriched by Setad’s assets. But through Setad, Khamenei has access to resources that allow him to bypass rivals and other branches of government.

The entities being delisted represent a significant portion of Setad’s holdings, though dozens of Setad-linked companies were never directly named by the U.S. Treasury and may not have been affected at all by the sanctions.

Setad’s removal from the sanctions list has raised concerns among some U.S. lawmakers. A Republican-led bid to block the deal in Congress effectively ended in failure last week when President Barack Obama won enough support from Senate Democrats and independents.

“These are bad actors who are now receiving the benefit of the bargain from the United States.”

Setad was originally sanctioned by the U.S. Treasury in June 2013. The conglomerate “produces billions of dollars in profits for the Iranian regime each year,” said David Cohen, then the Treasury’s under secretary for terrorism and financial intelligence, at a Senate banking committee hearing that year.

All entities sanctioned for being part of the Iranian government are being taken off the SDN list as part of the nuclear deal, also called the Joint Comprehensive Plan of Action (JCPOA), though U.S. persons and entities will still be banned from dealing with them.

Treasury said in a statement to Reuters that Setad would only be delisted when Iran shows it has fulfilled its commitments under the nuclear deal.

“This relief is similar to the relief we are providing to other economic actors in Iran as agreed to under the JCPOA,” Treasury said.

From a legal perspective, Setad was sanctioned solely because the U.S. government determined it was a part of the Iranian government, said a former U.S. official who declined to be identified.

At the time of Setad’s designation, the nuclear talks were deadlocked and Iran was days away from a presidential election that brought to power Hassan Rouhani, a pragmatist cleric who campaigned on a promise of repairing Iran’s relations with the world and ending the sanctions. In Iran’s theocratic system, the unelected Khamenei holds ultimate power.

“The reason why we dropped the hammer on them when we did is because we were attempting to put pressure on the supreme leader” to agree to a deal, said a second former U.S. official who declined to be identified.

Now that those negotiations have resulted in a deal, the second former official said, the rationale for maintaining sanctions on the conglomerate has weakened.

“The Iranians are hardly likely to make a nuclear deal with the United States in which we retain sanctions that directly target the supreme leader’s fund, a network that he is critically involved in,” the second former official said.

The 2013 Reuters investigation found that Khamenei exerts exclusive control over Setad’s economic empire. He chooses its executives and oversaw the creation of a body of legal rulings that safeguarded Setad’s asset acquisitions since its inception in 1989.

Setad’s current value and its holdings in the delisted entities could not be determined, because many websites with that data have been taken down since the Reuters investigation.

While most of Setad’s holdings are in Iran, it has some global reach. The Setad-linked entities being removed from U.S. secondary sanctions include firms based in South Africa and Germany.

Already, one Setad firm appears to be moving to take advantage of the deal. Ghadir Investment Company, which the U.S. Treasury identified as a Setad-linked firm, signed a 500 million euro ($565 million) contract with the engineering unit of Finmeccanica, a spokesman for the Italian defense group said in August.

Though the deal itself would likely have been legal prior to Ghadir’s removal from the sanctions list, sanctions experts said, the nuclear deal made it easier to procure financing.

When asked about the Finmeccanica deal, Treasury said it does not comment publicly on allegations of sanctions violations. Finmeccanica did not respond to a request for comment.