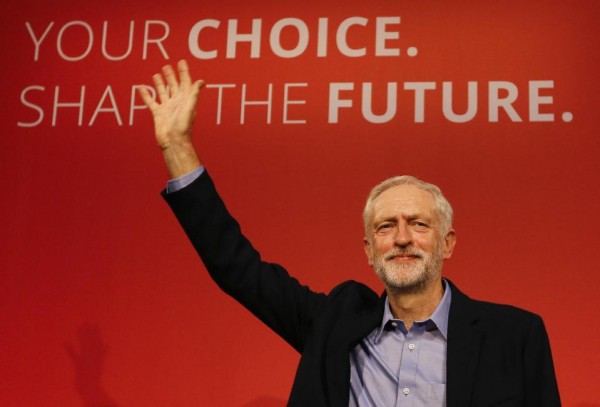 Jeremy Corbyn waves on stage after new is announced as the new leader of The Labour Party during the Labour Party Leadership Conference in London, Saturday, Sept. 12, 2015. Corbyn will now lead Britain’s main opposition party. (AP Photo/Kirsty Wigglesworth)
Share:
A veteran anti-war campaigner known for his unapologetically socialist views has won a landslide victory to lead Britain’s opposition Labour Party — an outcome that delighted supporters and dismayed others who never imagined he could be elected.

The overwhelming support for far-left lawmaker Jeremy Corbyn, 66, was one of the biggest shake-ups in British politics in decades.

His win Saturday marks a sharp left turn for his party — and will significantly challenge the tone of mainstream British politics, which is now dominated by Prime Minister David Cameron’s Conservatives.

“It’s certainly the most high-profile position an overt socialist has held in British politics since the 1980s,” said Martin Wright, lecturer in history and politics at Cardiff University. “It’s an absolute earthquake. For the last two decades, the center ground has been moving ever further to the right. This moves the frames of reference to the left and opens up an alternative.”

Considered an eccentric outsider and a longshot just months ago, Corbyn won many over with passionate arguments for nationalizing industry, heavily taxing corporations and the rich, increasing spending and ending austerity. Supporters say Corbyn is a refreshing voice in a party that has been moving toward the center ground for far too long.

Corbyn’s blunt rejection of that strategy attracted scores of enthusiastic new members and supporters to the party, earning him a rock-star welcome from many young people disillusioned with British politics.

But many senior leaders in the party have warned that Corbyn’s socialist ideas will alienate moderate voters and make Labour candidates unelectable — dooming the party to opposition status and ensuring that the Conservatives stay in power for years to come.

But cheers and applause erupted in the London conference venue Saturday as it was announced that Corbyn swept almost 60 percent of the vote, far ahead of his closest rival, Andy Burnham, who scored 19 percent. Some 422,664 votes were cast.

The politician, who has been a lawmaker for 32 years but never held government office, divides his own party with his radical views even as it struggles to recover from a heavy defeat in May’s national election. Within hours of his victory, several prominent Labour lawmakers announced they would not serve under Corbyn.

In his acceptance speech, Corbyn promised to bring about a more compassionate Britain and tackle “grotesque levels of inequality.”

“The Tories have used the economic crisis of 2008 to impose a terrible burden on the poorest people of this country,” he said. “Poverty isn’t inevitable, things can — and they will — change.”

Earlier, as he arrived at the conference venue, he was mobbed by dozens of supporters who sang the socialist anthem, “The Red Flag.”

Corbyn’s unexpected surge of popularity against his three younger, more mainstream rivals has already stirred months of vigorous, often bitter, debate within the party about its identity.

But since Labour lost power in 2010 — and suffered even worse losses to the Conservatives in this year’s election — some activists have been arguing that it was time to return to the party’s ideological roots.

Unlike his younger rivals — Burnham, Yvette Cooper and Liz Kendall — Corbyn is seen as a stalwart from “Old Labour” who embraces the socialist values that the party advocated in the 1980s. He wants more public investment in infrastructure, higher taxes for corporations and wealth redistribution. He also opposes Britain’s membership in NATO, and wants to scrap Britain’s nuclear weapons program and scale back its defense spending.

Rivals say he is inexperienced and argue that his economic policies are idealistic and impractical — although dozens of British economists have backed him.

Unsurprisingly, his victory drew a wide range of reactions Saturday. Union leader Dave Prentis said he “has ignited a spark of hope,” while the business group Institute of Directors said it believed Corbyn’s policies would “undermine our open and competitive economy.”

Ed Miliband, who stepped down in May as the Labour leader, urged his party to unite in support of Corbyn.

“Jeremy has won a very clear victory. I hope also … that Jeremy reaches out to all parts of the party, because he has a big job to do to seek to unite the party,” he said.

Wright believes Corbyn has what it takes to pose a real challenge to Cameron’s Conservatives.

“Miliband was trying to come up with populist reforms, whereas what Corbyn is offering is the genuine thing: thorough-going socialist reform,” he said. “We’ll have to see if the British public has the appetite for that. We might be surprised.”
YAHOO/AP