US may take in more Syrian migrants 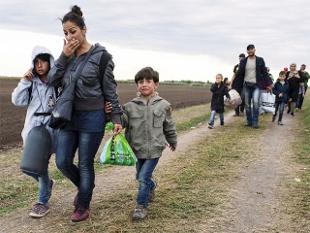 Facing mounting pressure to respond more aggressively to the migrant crisis unfolding across Europe, the White House on Tuesday said it was reexamining whether it should increase its assistance, including resettling more Syrians in the United States.

As the leaders of Germany and Sweden appealed to other European nations to take their fair share of migrants, American officials hinted that the United States might be moving toward an increase. White House officials said a “working group” at the State Department was “actively considering” a range of options, including refugee resettlement.

The United States currently limits the number of migrants from Syria to 1,500 per year, a tiny fraction of the millions who have flowed out of the war-ravaged country.

Officials declined to say whether a sizable increase in the cap had been discussed.

“The international community is looking at the United States right now to determine what additional steps we can take to try to confront, or help Europe confront, this difficult challenge,” said Josh Earnest, the White House press secretary.

“We’re certainly mindful of the urgency around increasing the resources and response.

Human rights activists have been increasingly critical of the United States for what they say is an inadequate response.

Critics also say that the United States has not done enough to end the violence that has sent Syrians fleeing, often at great risk, to Europe.

The United States Committee for Refugees and Immigrants, a nongovernmental agency, has urged President Obama to open American borders to 100,000 Syrians in the next year, in addition to expanding opportunities for resettlement for other migrants.

“We call on our government to continue to show the leadership we have seen in past crises to rescue people who were persecuted,” said Stacie Blake, the director of government relations for the committee.

“We cannot stand by and see these photographs of people dying and drowning and running for their lives and not feel compelled to do more.”