‘That’s mostly what I do’: George Clooney admits to being Amal’s trophy husband 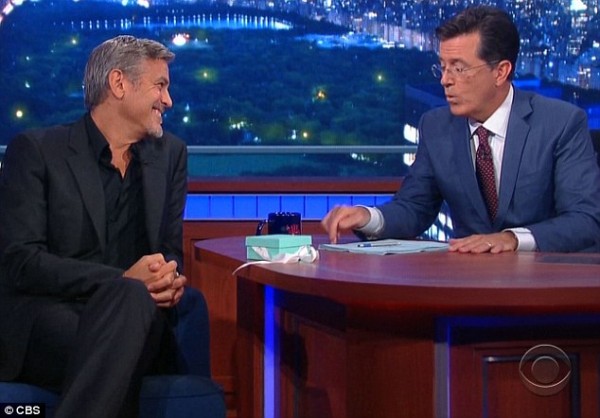 He desperately needed to start with a bang on his first ever Late Show on CBS.
And Stephen Colbert certainly delivered after he got George Clooney to admit he is a mere trophy husband as he made his grand debut on Tuesday night.
The funnyman verbally ran rings round the Hollywood heartthrob as he extracted his stunning confession about his relationship with his high-flying human rights barrister wife Amal.
Witty raconteur Stephen said: ‘What is it like to be the arm candy in a relationship, because she’s the very serious person?’
‘She must say like, “We’re going to meet extremely intelligent people tonight – these are not show folk. Just be shiny and pretty.”‘
George conceded: ‘That’s mostly what I do.’
In a rare turn for modern late night shows, George did not even have a project or product to promote.
The dynamic duo used this as an excuse for some more mischief however, with the former ER favourite pretending to be hawking a fake film called Decision Strike.

It purportedly features the manly hunk as Secretary General Clooney, who has to find a way to stop the world being hit by a nuclear warhead.
In one scene a tuxedo wearing George is too busy trying to bed a lady he cannot be bothered saving the planet.
The actor joked: ‘I did my own sex, In fact, I do my own sex. The audience deserves it.’