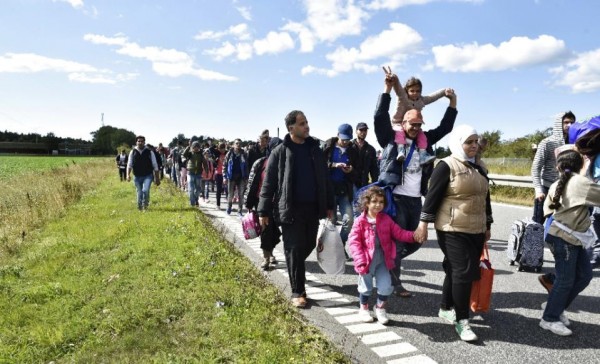 PM Lars Løkke Rasmussen will meet with Denmark’s political leaders later on Monday. “It is a European solution”, Rasmussen told a press conference ahead of meeting with other parliamentary parties to discuss the current refugee situation, Xinhua reported.

“The Danish immigration authorities are informing about changes of conditions regarding residence in Denmark being implemented by the new Danish government”, the ad reads before listing essentially seven reasons why asylum seekers might consider a neighboring European country instead. Integration Minister Inger Støjberg said the adverts would communicate the new policy straight to the immigrants before they even set off. “Therefore we need to find a solution that lives up to our standard of human rights”, he said.

The ads are printed as the first wave of refugees began arriving in southern Zealand of Denmark from Austria and Germany over the weekend.

“This is being done for the safety of the people who are walking along the motorway”, local police said in a statement after closing the first 29 kilometres of the road from Rodby harbour in southern Denmark to Copenhagen late yesterday. “The pressure has grown”, he said. The good solution is not a Danish solution.

Rasmussen revealed that he also spoke with German Chancellor Angela Merkel over the weekend and offered to take 100 additional Syrian asylum seekers as “a political gesture”, but those numbers quickly became irrelevant when more than four times that number crossed into Denmark between Sunday and Monday.

The Danish People’s Party has called for border controls while the immigration ministry launched an advertising campaign in Lebanon to discourage refugees from travel to Denmark.

“We hopefully can reach a situation where people who want to seek asylum in Sweden can do that”, he told journalists. It said it expected 20,000 refugees this year, compared to 14,000 in 2014. Danish rules on accepting refugees are seen as stricter than in many other European countries.