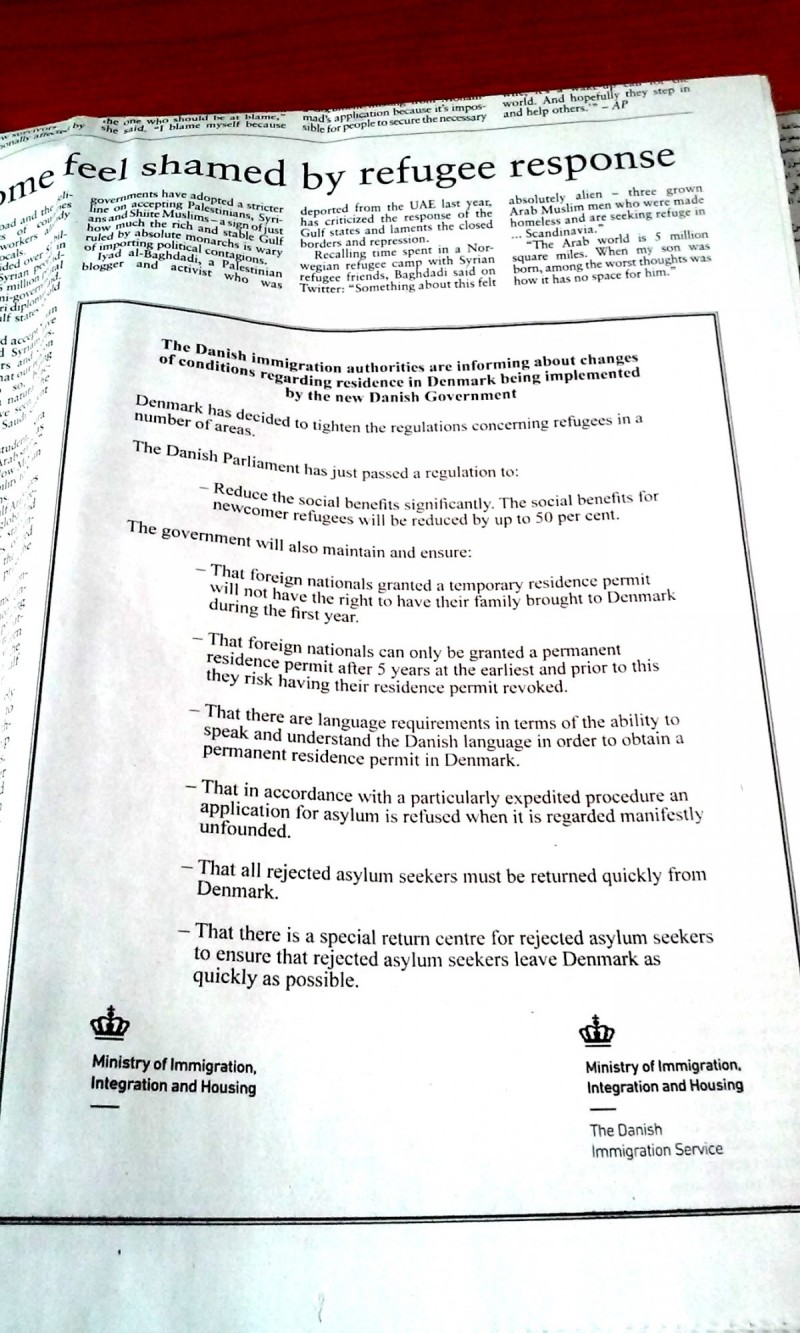 Denmark’s publication of anti-migrant ads in Lebanese newspapers has prompted some Arab readers to say it “doesn’t think about the humanitarian side” of the Syria war.

The ads first appeared in the Assafir, Annahar, and Daily Star newspapers on Monday (7 September).

They note: people must now wait at least five years to get permanent residence; they’ll get up to 50 percent less welfare than before; and Denmark is speeding up expulsion of failed asylum seekers.

The ads were also published on Danish government websites in 10 languages, circulated on social media, and put on the walls of asylum centres in Denmark.

She noted the figure is the same as the cost, for one year, of hosting a refugee. Given the expectation that some people will decide not to go to Denmark after reading the ads, she described them as “good business”.

The campaign comes amid a surge in migration toward the EU, in part, due to the Syria war.

It targets Lebanon because it’s home to one of the largest Syria refugee communities – some 1.4 million people.

But whatever financial benefit the ads may bring, they come at a cost to Denmark’s reputation.

Mona, a 40-year old Lebanese woman, told EUobserver: “They [the Danes] are thinking more about the situation in the next 10 years, from the point of view of protecting their own citizens. We think more about the humanitarian side of Syrian refugees who preferred to risk drowning [in the Mediterranean] than to stay and face the war”.

She added: “States don’t think about the humanitarian side unless there is a price”.

Imad, 42, said: “They cannot stop the refugees [from coming], but this is meant to intimidate them psychologically”.

Bassam, 34, noted the ads are “not totally negative” because they say if you learn Danish you’ll have more chance of getting a job.

But Hussein, 23, showed another side of Arabic opinion.

He said EU governments are letting in refugees because they feel guilty for their own “policies in Iraq, Syria, Yemen, etc.”. He added that if they wanted to, the Western powers “could stop the wars”.

The ad campaign also has critics in Denmark.

A counter-campaign on Facebook titled “We welcome you to Denmark” has been endorsed by 23,000 people. “We are not all like minister Stoejberg and the rest of the Danish government”, it says.

The ads came out amid the first arrivals, in Denmark over the weekend, of 300 refugees from Austria and Germany.

They also came out amid a Danish campaign for its former PM, Helle Thorning-Schmidt, to be the next UN high commissioner for refugees.

The current UN commissioner, Antonio Guterres, whose mandate expires at the end of the year, recently noted that Lebanon has a record high per capita number of refugees – more than 20 percent of its population.

Apart from the Syrians, it also hosts 600,000 Palestinian people exiled by Israel.

Last month, a handful of people drowned when they tried to reach Europe by boat from the port of Tripoli in north Lebanon.