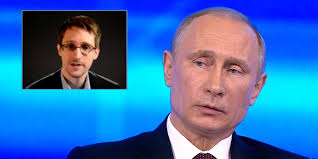 Former US intelligence contractor Edward Snowden — who has been granted asylum by Russia — criticised the country’s crackdown on human rights and online freedom Saturday as “wrong… disappointing and frustrating”.

Snowden called Moscow’s restrictions on the web “a mistake in policy” and “fundamentally wrong” as he accepted a Norwegian freedom of expression prize by videophone from Russia.

“It’s wrong in Russia, and it would be wrong anywhere,” said Snowden, 32, who was granted asylum by the Kremlin two years ago after Washington filed a warrant for his arrest for having leaked documents that revealed the vast scale of US surveillance programmes.

Pushed on Moscow’s deteriorating human rights record, the whistleblower said the situation is “disappointing, it’s frustrating” and described restrictions on the Internet as part of a wider problem in Russia.

“I’ve been quite critical of (it) in the past and I’ll continue to be in the future, because this drive that we see in the Russian government to control more and more the internet, to control more and more what people are seeing, even parts of personal lives, deciding what is the appropriate or inappropriate way for people to express their love for one another…(is) fundamentally wrong,” he said.

Snowden said he had “never intended to go to Russia”, and that he had been transiting the country en route for Latin America when US officials cancelled his passport.

“I applied for asylum in 21 countries,” Snowden told the audience at the ceremony for the Norwegian Academy of Literature and Freedom of Expression’s Bjornson Prize. “They were all silent. Russia was actually one of the last countries in that sequence that I applied for.”

Despite his extraordinary situation, Snowden described his life as “normal”, even if he’d rather be living in his own country.

And his criticism of Russian Internet restrictions and laws encroaching on freedom of speech notwithstanding, Snowden said he feels he is allowed to express himself in Russia.

“I do. And I think it’s primarily in the context of the fact that most activities happen online. I mean, when people ask me where I live, the most honest answer is on the Internet.”