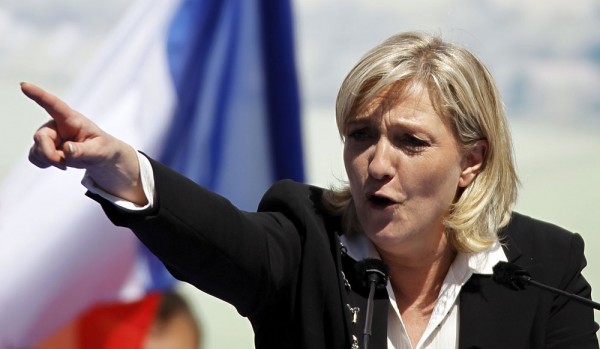 Marine Le Pen, the French far-right leader accused Germany of looking to lower wages and hire “slaves” by opening its doors to thousands of migrants and refugees.
Share:

French far-right leader Marine Le Pen accused Germany on Sunday of looking to lower wages and hire “slaves” by opening its doors to thousands of migrants and refugees.

The European Union’s largest economy has been dealing with a record influx of refugees in recent weeks, with thousands of them crossing its borders in the past days, many traveling through Austria from Hungary where they had been stranded against their will for days.

“Germany probably thinks its population is moribund, and it is probably seeking to lower wages and continue to recruit slaves through mass immigration,” Marine Le Pen told supporters at a meeting in the southeastern city of Marseille, a key French destination for migrants from north Africa.

Polls have been suggesting that Le Pen, known for her strong speeches against immigration, could make it to the second, run-off round of the presidential election in 2017, but that she would then lose.

Immigration has been a rising worry in French public opinion. Another poll showed on Sunday that French people were against softening rules to access refugee status, including for Syrians fleeing civil war.

Unlike Le Pen, President Francois Hollande has been backing German Chancellor Angela Merkel. The two leaders wrote a joint letter to EU leaders to press for a mechanism for resettling refugees across all member states.

And thousands marched in Paris and several other cities across France on Saturday to show their solidarity with asylum seekers.

Germany, with relatively liberal asylum laws and generous benefits, is the EU’s biggest recipient of people fleeing war in the Middle East and economic migrants from southeastern Europe. Berlin expects 800,000 refugees and migrants this year.

Le Pen accused Germany, which has the EU’s lowest unemployment rate, of imposing its immigration policy on the EU.

“Germany seeks not only to rule our economy, it wants to force us to accept hundreds of thousands of asylum seekers,” she said, adding that France did not have the means or the desire to open its doors “to the world’s misery”.

French opposition leader and former president Nicolas Sarkozy also said on Saturday Europe could not welcome all migrants and urged the creation of zones to sort asylum seekers before they enter the EU’s open-border area.