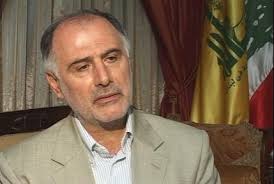 “Hezbollah supports Michel Aoun’s presidential  candidacy”, Minister of State for Parliament Affairs Muhammad Fneish, stressed  Sunday  in in Ras el-Ein Houseiniyya mosque  during the  funeral of  a Hezbollah member who was  killed in Syria.

“Thanks to Nabih Berri’s initiative, state institutions catering to people’s needs could be reactivated once more,” Fneish a key Hezbollah party official  added in a possible reference to the upcoming all party dialogue talks that Berri is scheduled to launch on Wednesday .

Commenting on the Friday  rally by  the  Free Patriotic Movement in down town Beirut he said   :

Commenting on the uprising  by the You Stink group and its supporters  against corruption by the Lebanese politicians  he said :

“Whoever accuses our party of corruption misses the mark and covers up for the real corrupters.”

According to observers  the Iranian backed Hezbollah  militant group never wanted  Aoun to be  a president and what Fneish is claiming  is strictly  lip service .