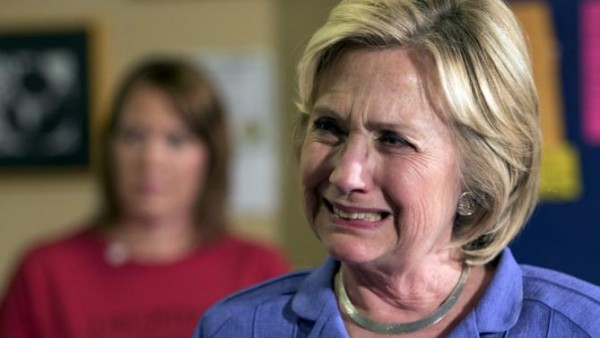 Democratic presidential candidate Hillary Clinton reacts as she listens to a question from the audience during a campaign event at Uncle Nancy’s Coffee in Newton, Iowa, September 6, 2015. REUTERS/Scott Morgan
Share:
A new poll is putting US Senator Bernie Sanders ahead of Hillary Clinton by 9 percentage points in New Hampshire, the first primary state and is closing ground on the Democratic front-runner in Iowa, according to an NBC News/Marist poll released Sunday.

Sanders who was born in New to Jewish parents is leading Clinton 41-32, up a whopping 19 points from a similar poll in July. And Clinton’s support dropped by 11% in Iowa over the same time.

Clinton has been plagued by continued questions over her use of private email while at the State Department, contributing to voters’ lack of trust in her. Though she leads Sanders in national polling, the “drip, drip, drip” nature of both congressional and federal inquiries into her email practices are having an effect on her candidacy.

Vice President Joe Biden, who has been publicly mulling a run, has been staying steady at 12% support in New Hampshire and 16% in Iowa.

The poll also shows Republican front-runner Donald Trump maintaining commanding leads in both of the early nominating states — 29% in Iowa and 28% in New Hampshire.

Wisconsin Gov. Scott Walker, who once led Iowa polling, has slipped back into single-digit support with 5%. Retired neurosurgeon Ben Carson, though, has continued his strong showing there, picking up 22% support.

Ohio Gov. John Kasich — who hopes to appeal to independent as well as conservative voters — has held steady in New Hampshire, at 12%, enough for second place. Carson is at 11% and one-time front-runner Jeb Bush has slipped to 8%.
CNN, Bloomberg