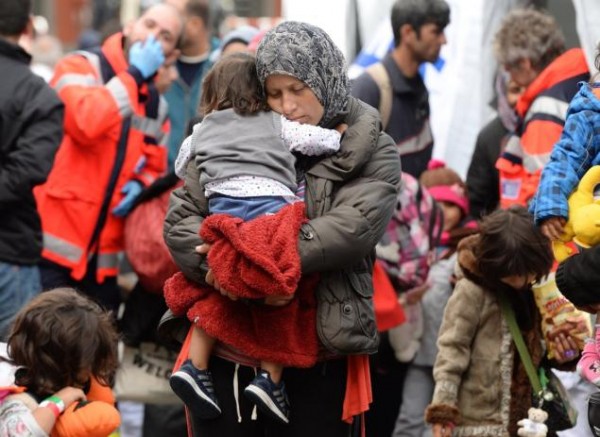 Migrant mother with a child waits for a medical check after their arrival in Munich, Germany, on Sunday.
Share:

The welcoming cheers that comforted the refugees were echoed in Vatican City by Pope Francis, who called on Catholics across Europe to aid and house the travel-weary wanderers.

“May every parish, every religious community, every monastery, every sanctuary in Europe host a family, starting with my Diocese of Rome,” Francis said.

Many of the migrants crossing from Hungary into Austria on Sunday were permitted to use cross-border trains previously off-limits to travelers lacking legal permission to travel through Europe.

Unlike Saturday’s movement of asylum seekers, Sunday’s train services did not require migrants to walk across the border into Austria to continue their journey.

Instead, they merely walked across a train platform, recently purchased train tickets from Budapest in hand.

“No check, no problem,” said Reza Wafai, a 19-year-old from Bamiyan, Afghanistan, who hopes to join relatives in Dortmund, Germany. He was traveling without a passport, he told The Associated Press, carrying only a black-and-white Hungarian asylum seeker ID.

Austrian police said more than 13,000 migrants have passed through their country to Germany over the past two days.

Many of the migrants welcomed the relief after conditions in Hungary had deteriorated. Officials there have sought ways to stem the growing tide of asylum seekers from neighboring Serbia.

Hungarian government spokesman Zoltan Kovacs said the free movement for migrants on trains represented an effort “to return to normality, whatever that is.”

But along the country’s Serbian border, authorities turned away two passenger trains, citing large groups of migrants onboard.

It was a much different scene in Munich, Germany, where about 6,000 people arrived at the town’s main train station to cheers Sunday. Many were taken to local shelters after registering with authorities, while others were shuttled to other towns and cities across Germany.

The refugees, fleeing the atrocities of a civil war that has ravaged Syria and fighting in Iraq, Afghanistan and Africa, were granted safe passage into Austria and Germany after a deal Friday that suspended European Union rules requiring them to be registered and processed in their first country of arrival.

German Interior Minister Thomas de Maiziere warned Sunday that the decision was a one-time exception and that the country’s “big willingness to help, which Germany has shown in the last weeks and months, should not be overstretched.”

In the U.S., aid groups pushed the government to let more refugees cross the Atlantic to help reduce the growing crisis in Europe.

“You have 4 million Syrians living on borders of Syria, as refugees,” said Lucy Carrigan of the International Rescue Committee. “To be able to alleviate some of the pressure on those countries, the United States, which has historically been a leader . . . needs to lead and do much more.”

“It’s not even close to being enough,” Carrigan said.

But not everyone agreed with Pope Francis’ message Sunday.

“Israel is not indifferent to the human tragedy of the refugees from Syria and Africa,” he said at a cabinet meeting in Jerusalem. “But Israel is a small country, a very small country, that lacks demographic and geographic depth; therefore, we must control our borders against illegal migrants and terrorism.”