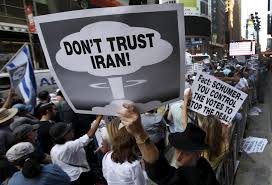 A man holds up a sign as he and several thousand other protestors demonstrate during a rally apposing the nuclear deal with Iran in Times Square in the Manhattan borough of New York City, July 22, 2015. REUTERS/MIKE SEGAR
Share:
Washington, DC – A majority of US voters from both parties are concerned about aspects of the Iran nuclear deal governing inspections of Tehran’s nuclear facilities, according to a survey released Tuesday by the University of Maryland’s Program for Public Consultation.

Participants in the national “Citizen Cabinet” survey were presented with a description of the dispute regarding Iran’s alleged nuclear weapons program and the principal components of the deal finalized in Vienna on July 14. They were then briefed on critiques of the agreement and subsequent rebuttals to those critiques.

Those surveyed were polled on the degree to which they found these criticisms or rebuttals convincing.

During a conference call with reporters Tuesday, Dr. Steven Kull, one of the primary investigators on the survey, pointed to the share of participants agreeing with criticism of Iran’s nuclear inspections as indicative of the significant concern regarding the transparency of the deal.

Particularly, 79 percent of those polled—the highest consensus for any question in the survey—found the following critique convincing:

“While the deal does allow us to continuously monitor nuclear sites, it does not provide anytime/anywhere access to other sites such as military installations. We can demand to inspect those sites if we see suspicious activities, but Iran can ask for hearings where it can argue that it is not really necessary. We can ultimately gain access, but the whole process can take up to 24 days, and meanwhile Iran could hide their illegal activities. While some illegal nuclear activities can be detected, others cannot.”

Those siding with the critique included 71 percent of Democrats and 76 percent of Independents. Meanwhile, only 53 percent found convincing a rebuttal that said it would be difficult for Iran to cheat the agreement without being caught.

One of the secret deals governs the inspection of Iran’s Parchin military facility, which is believed to have housed nuclear arms testing. An apparent draft of the agreement publicized last month indicated that Iran would be permitted to use its own experts to inspect Parchin.

Ignoring calls from lawmakers, President Obama has refused to provide Congress with the details of the secret agreements as they conduct their 60-day review of the finalized deal.

While the poll released Tuesday briefed respondents on criticism regarding the inspections of Iran’s nuclear facilities, it did not specifically address the secret side deals between Tehran and the IAEA, Kull confirmed to the Washington Free Beacon. Instead, it focused on more popular critiques of the deal voiced by members of Congress.

Despite concerns, 55 percent of participants ultimately recommended that Congress approve the nuclear agreement. The remainder came out in favor of three alternatives to the deal, including ramping up sanctions on Tehran (23 percent), renegotiating the deal (14 percent), and employing military threats against the country (7 percent).

The newly released National Citizen Cabinet survey was conducted between Aug. 17 and 20 and involved a sample of 702 registered voters recruited by Nielsen Scarborough from its larger national panel.

It comes on the heels of a CNN/ORC poll that indicated a growing majority of U.S. adults want Congress to reject the deal with Iran.