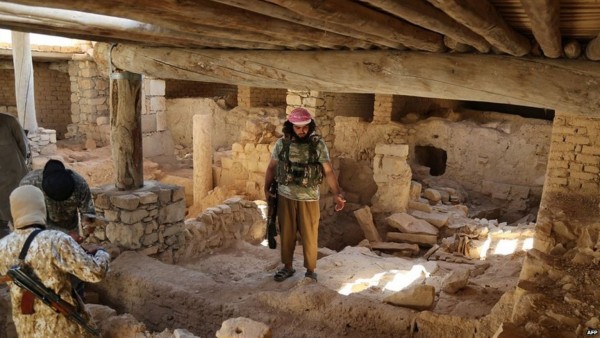 The militants have also moved Christians taken captive in the town to their stronghold of Raqqa, according to a UK-based monitoring group.

IS captured al-Qaryatain from government forces some two weeks ago.

Photos showed the group bulldozing parts of the monastery, which was founded more than 1,500 years ago.

IS also transferred more than 100 captives to Raqqa, according to the Syrian Observatory for Human Rights (SOHR).

But the group says the fate of 230 people kidnapped after al-Qaryatain’s capture remains unclear, including Jacques Mourad, a prominent local priest who had been working at the Mar Elian monastery.

IS regards Christians as infidels. The threat of violence and persecution from the militants has forced many Christian communities from their homes in Syria and northern Iraq.

Al-Qaryatain was captured in the militants’ first major offensive since May, when they seized the historic town of Palmyra, famed for its Roman-style ruins.

More than 230,000 Syrians have died in the civil war, which began after anti-government protests in March 2011.

Rebel groups that originally fought against the government of President Bashar al-Assad have also been battling each other in an increasingly complex and bloody conflict.

In a separate development, at least five people have died in an Israeli strike on a Syrian-held section of the Golan Heights.

Israel has carried out a series of raid in the area, which lies in south-western Syria, after rockets fired from Syria struck its territory on Thursday. The rockets set fire to scrubland but did not cause any casualties.

Israel’s military has accused Palestinian militants from the Islamic Jihad group of firing the rockets, who Prime Minister Benjamin Netanyahu said Iran had given “sponsorship and instruction” to.

One Syrian soldier was earlier reported killed in an Israeli strike on military positions in the Syrian-held section of the Golan Heights.

Israel seized most of the Golan Heights from Syria in the closing stages of the 1967 Six-Day War.