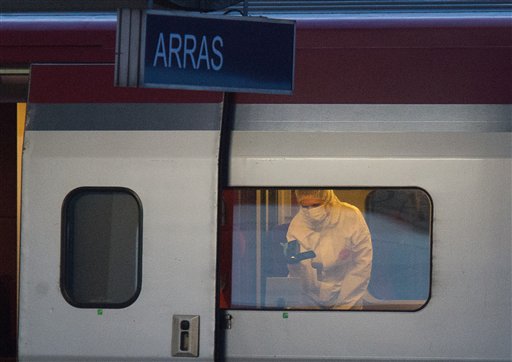 A police officer videos the crime scene inside a Thalys train at Arras train station, northern France, Friday, Aug. 21, 2015. A gunman opened fire with an automatic weapon on a high-speed train traveling from Amsterdam to Paris Friday, wounding three people before being subdued by two American passengers, officials said. French Interior Minister Bernard Cazeneuve, speaking in Arras in northern France where the suspected was detained, said one of the Americans was hospitalized with serious wounds. (AP Photo)
Share:
A gunman opened fire on a high-speed train traveling from Amsterdam to Paris on Friday, wounding two people before three American passengers subdued him, according to officials and one of the Americans involved.

French Interior Minister Bernard Cazeneuve, speaking in Arras in northern France where the suspect was detained, said one of the American passengers was hospitalized with serious wounds.

Two of the Americans were in the military, according to their traveling companion and childhood friend Anthony Sadler, a senior at Sacramento State University. He told The Associated Press that the injured American was Spencer Stone of the Sacramento area and the other was Alek Skarlatos of Roseburg, Oregon.

“We heard a gunshot, and we heard glass breaking behind us, and saw a train employee sprint past us down the aisle,” Sadler said from France, describing the drama. Then, they saw a gunman entering the train car with an automatic rifle, he said.

“As he was cocking it to shoot it, Alek just yells, ‘Spencer, go!’ And Spencer runs down the aisle,” Sadler said. “Spencer makes first contact, he tackles the guy, Alek wrestles the gun away from him, and the gunman pulls out a box cutter and slices Spencer a few times. And the three of us beat him until he was unconscious.”

“The gunman never said a word,” he added.

In Washington, the Pentagon said it “can only confirm that one U.S. military member was injured in the incident. The injury is not life-threatening.”

The White House issued a statement saying that President Barack Obama was briefed on the shooting, and said, “While the investigation into the attack is in its early stages, it is clear that their heroic actions may have prevented a far worse tragedy.”

The suspect is a 26-year-old Moroccan, according to Sliman Hamzi, an official with the Alliance police union, who spoke on French television i-Tele.

Stone is with the Air Force stationed in the Azores and Skarlotos, a 22-year-old National Guardsman, had returned from a deployment in Afghanistan in July, according to Skarlotos’ step-mother Karen Skarlotos.

She spoke with her step-son immediately after the incident. “He sounded fine, but he was intense — he sounded like he had just thwarted a terrorist attack.”

“Alek and Spencer, they’re big, brave, strong guys and they decided they were going to tackle him. And they did. Spencer tackled him, and Alek took the gun and clobbered him a good one,” she told the AP from Oregon. “Spencer got a couple good slices on him. But they were able to subdue him while the train was still moving.”

Authorities met them at the next station as the train doors opened, she said.

Philippe Lorthiois, an official with the Alliance police union, said the attacker did not fire his automatic weapon but wounded one man with a handgun and the other with a blade of some kind.

Investigators from France’s special anti-terror police are leading the investigation, a spokeswoman for the Paris prosecutor’s office said.

“As always where an act that could be terrorist in nature is involved, the greatest care and the greatest precision will be used,” Cazeneuve said.

Cazeneuve said the Americans “were particularly courageous and showed great bravery in very difficult circumstances” and that “without their sangfroid we could have been confronted with a terrible drama.”

Passenger Christina Cathleen Coons of New York described the drama in car 12 of the train in an interview with Ouest France newspaper.

“I heard shots, most likely two, and a guy collapsed,” she is quoted as saying.

Coons, identified as a 28-year-old vacationing in Europe, said a window broke above one woman’s head. “A guy fell to the floor and had blood everywhere,” she is quoted as saying.

She described lying on the floor herself and taking photos with her phone.

The attack took place at 1545 GMT while the Thalys train was passing through Belgium, according to a statement from the office President Francois Hollande. Hollande said he’s spoken with Belgian Prime Minister Charles Michel, and the two leaders pledged to cooperate closely on the investigation.

Europe’s major rail stations, such as Paris’ Gare du Nord and Brussels’ Gare du Midi, are patrolled by soldiers armed with rifles, but passengers can board most high-speed trains without passing through metal detectors or having their bags searched.

One exception is the Eurostar between Paris and London. Passengers on those trains must pass through a metal detector and have their bags scanned as well.

Thalys is owned by the French and Belgian railways and operates high-speed trains serving Paris, Brussels, Amsterdam and Cologne, Germany.

French authorities have been on heightened alert since Islamic extremist attacks in January left 20 people dead, including the three attackers. A lone attacker claiming ties to Islamic extremists also targeted an American-owned factory in France earlier this year, beheading his employer.