The police is the main suspect in Brazil mass killings 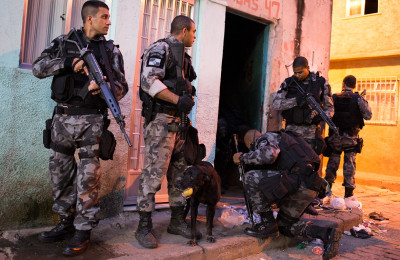 But even more terrifying than the security camera footage is that the main suspects in the massacre are police themselves.

The victims in the bar, a modest drinking hole with a pool table and plastic chairs, were among 18 gunned down execution-style in several locations within the space of a few hours Thursday in Brazil’s biggest city.

And they were only part of a much bigger toll from the chaotic underbelly of a country that would prefer to be known for its industrial might, the Amazon jungle, carnivals and hosting next year’s Rio Olympics.

On Monday, almost 550 kilometers (340 miles) from Sao Paulo in Uberlandia, five people, one of them a woman, were shot dead in a fusillade of what were reportedly .380 caliber bullets.

And more than a thousand kilometers away this July, 37 people were shot dead over a single weekend in Manaus, the capital of the Amazon region and one of the cities that hosted the 2014 football World Cup.

In each case — and many others that received less media attention — the police are widely considered the likely culprits.

In Sao Paulo, a security guard and a police officer had just been killed.

In Uberlandia, a prison guard had been killed on his way home the day before the massacre.

In Manaus, a sergeant from the national paramilitary police had been murdered as he came out of a bank.

“These cases are fairly frequent,” said Rafael Alcadipani da Silveira, an expert on the police and a member of the Brazilian Forum on Public Security.

Alcadipani explained that police often mete out their own justice in Brazil because they feel let down by the state, especially in the cases of killings of unprotected off-duty officers.

“What happens is that if you see your friend is killed and nothing is done, you take things into your own hands and avenge your friend,” he said.

Crime statistics in Brazil are often incomplete and unreliable and Alcadipani says an official estimate of 500 police officers killed annually is not even half the true number.

Alcadipani said around 80 percent of police have had a close colleague who was murdered, while 52 percent say they have trouble providing for their families, given that civil police officers earn only around ($865) a month.

Large portions of Brazilian society seem happy to put up with state lawlessness if it’s directed at criminal suspects.

Even vigilante justice by ordinary citizens gets a sympathetic hearing on social media forums and in commentaries on news sites.

Photographs of mob lynchings — including one in which a young man was tied to a post and beaten to death in the far northeastern town of Sao Luis de Maranho — regularly appear in newspapers without arousing protest.

“If they killed bandits, you could say that was a good thing. Brazil is in an undeclared war,” ran a typical comment on Band News after the site published the security camera footage of the Sao Paulo bar killings.

Even in Manaus, the senior local police officers remain in their posts and little progress has been made, despite a month-long investigation.

In Sao Paulo, officials have acted quickly to launch a probe and on Tuesday announced that at least 10 people had been involved in the executions, with security officers the main suspects.

However, analysts say that successful prosecutions are rare.

Camila Dias, an expert on violence at the University of Sao Paulo, said that “death squads” operate almost with impunity.

“Almost all the massacres that take place in Sao Paulo have military police involvement. The dynamic of the executions, the use of masks, the timing, the large numbers of victims — all this is a model that gets repeated,” she said.

“Sadly, many times we see police participation, but it can’t always be proved in court.”