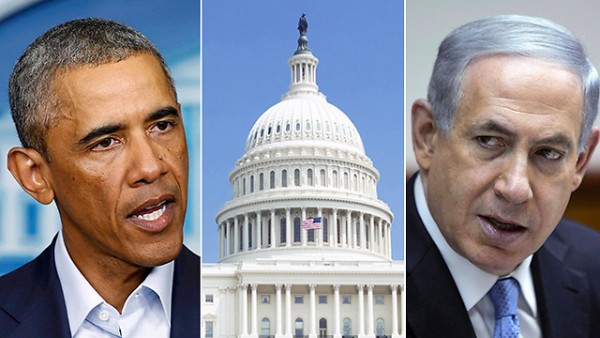 From his rented vacation home on Martha’s Vineyard with sweeping views of the Atlantic Ocean, President Obama has been making phone calls to Democratic members of Congress, trying to rally support for the nuclear deal with Iran that faces a vote next month.

“If you support the deal, we’d like you to make that clear,” he tells the lawmakers, according to a White House official who would describe the private calls only on condition of anonymity. “And if you still have concerns, we want to be able to answer those questions.”

The personal appeals from the president are part of an orchestrated lobbying effort by the White House, supported by a coalition of antiwar and progressive organizations, aimed at persuading Democrats who are undecided about the nuclear agreement with Iran to vote against a Republican bid to block it.

Meeting weekly in a conference room in the downtown Washington office of the Ploughshares Fund, a foundation devoted to eradicating nuclear weapons, the coalition strategizes and plans advertising, letters and petition drives to press its case. Ploughshares also finances many of the participants in the effort.

They are up against an equally determined and well-financed effort by opponents of the deal, led by the powerful American Israel Public Affairs Committee working with Jewish advocacy groups and conservative-backed organizations, including the American Security Initiative, which are pressing Democrats to reject the accord.

With an advertising budget topping $20 million and activists sent to meetings and town-hall gatherings with lawmakers around the country, they are working to transform what public polls show is a deep divide over the deal into sufficient opposition in Congress to block it.

Prime Minister Benjamin Netanyahu of Israel, a fierce critic of the agreement, also is leaning on lawmakers from afar. The Israeli ambassador to the United States, Ron Dermer, who is close to Mr. Netanyahu, has been contacting scores of lawmakers to make the case against the agreement.

“The ambassador has met with more than 60 senators and congressmen in the last month,” said an Israeli official, speaking on condition of anonymity without authorization to publicly detail the lobbying efforts. “He’s speaking to everybody — particularly Democrats, who ultimately will decide this issue. He wants to make sure that they hear Israel’s views directly.”

The battle is centering on Democrats after supporters lost perhaps their only opportunity to win a Republican backer on Saturday, when Senator Jeff Flake of Arizona said he would join the rest of his party and vote to reject the deal.

The dueling efforts represent a gritty summertime lobbying fight unusual in the annals of foreign policy debates, the outcome of which could have major implications for Mr. Obama’s legacy and United States policy in the Middle East.

They also are shaping up as a proxy fight between clashing political strains of American Jews, embodied by one pro-Israel group, J Street, on one side and Aipac on the other — each trying to demonstrate that it best represents the interests and views of pro-Israel voters.

“As public support for the flawed Iran deal is rapidly eroding, our members along with other Americans are expressing their views to their senators and representatives across the country during the congressional recess,” said Marshall Wittmann, a spokesman for Aipac.

J Street, which has begun its own $5 million advertising campaign and has been deploying former military officials and diplomats to Capitol Hill as part of a lobbying effort, has been working to reassure anxious Democrats that they will not face a backlash from Jewish voters and donors for supporting the Iran deal.

“There’s no August recess here,” said Dylan J. Williams, the vice president of government affairs at J Street, describing a pace of meetings and town-hall gatherings with lawmakers in their home districts and states. “My inbox is full with requests for explanations of this or that element of the agreement, what is the response to X or Y line of attack against it.”

To answer them, he has experts on nuclear arms control “on speed dial,” and a stable of organizational partners with which to compare whip lists and share information, Mr. Williams said.

Many of them have received funding from Ploughshares, which says it has spent $11 million over the past six years advocating for a nuclear deal with Iran. The organization now is acting as a hub for groups pushing for approval of the agreement.

“This is by far the biggest and most comprehensive campaign that we’ve been involved with,” said Philip Yun, the fund’s executive director, who called the deal “a gateway issue” with the potential to “show the power of diplomacy over force.”

The White House has relied heavily on the echo chamber of supportive voices as it seeks to demonstrate backing from prominent foreign policy and national security figures — it calls them “validators” — who publicly describe the virtues of the accord. Many of the groups that have organized the public comments, including the New York-based Iran Project, have received money from Ploughshares.

“There’s been a steady drumbeat of people outside the day-to-day politics making the case with us, and that is by design,” the White House official said. “We’ve been working with all the outside groups on this.”

In one recent example, three dozen retired generals and admirals released an open letter endorsing the agreement as “the most effective means currently available to prevent Iran from obtaining nuclear weapons.”

Opponents were quick to answer the assertion with some military voices of their own: A new group, Veterans Against the Deal, is running advertisements in nine states featuring a veteran maimed by an Iranian bomb while serving in Iraq. In the ad, retired Staff Sgt. Robert Bartlett says politicians who back the deal will have “blood on their hands” for funding Iranian terrorism, a reference to the lifting of economic sanctions on Tehran under the agreement. Mr. Flake had been a target of the advertisement over the past week.

“We were the soldiers on the front lines, so we’re able to counter the 36 generals with the voices of veterans who know this enemy,” said Michael Pregent, the group’s executive director. “We want to give the congressmen and senators a chance to vote against this by saying these nonnuclear concessions are dangerous. It’s a legitimate, noble out — a fact-based out.”

Mr. Pregent would not reveal his group’s financial supporters, but it has partnered with the American Security Initiative, an organization founded by the former Republican senators Norm Coleman of Minnesota and Saxby Chambliss of Georgia; Evan Bayh, a former Democratic senator from Indiana; and Joseph I. Lieberman of Connecticut, a Democrat-turned-independent former senator.

Mr. Lieberman is also an adviser to Citizens for a Nuclear Free Iran, the lobbying and advertising offshoot Aipac has formed to fight the Iran deal. And, last week, he took the helm of United Against a Nuclear Iran after the bipartisan advocacy group decided to mobilize against the agreement, prompting its president, Gary Samore, to step down because he supports the deal.

Organizations fighting the deal also are asking their members to call, email and visit lawmakers to make a show of disapproval.

“This is the biggest mobilization in the community that we have ever seen,” said Nathan J. Diament, the executive director of the Orthodox Union Advocacy Center, which has consulted with Aipac and other Jewish advocacy organizations on the opposition efforts. “People are energized, and they want to take action.”

The Orthodox Union is planning to bring hundreds of rabbis to Washington on Sept. 9, just as Congress reconvenes, Mr. Diament said, the same day Aipac plans to bring its own advocates to the capital to make a final push against the deal.