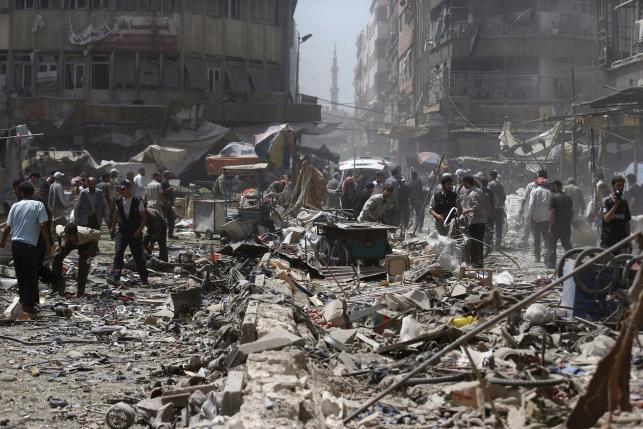 People inspect a site hit by what activists said were air strikes by forces loyal to Syria’s President Bashar al-Assad on a marketplace in the Douma neighborhood of Damascus, Syria August 16, 2015. REUTERS/Bassam Khabieh
Share:

Syrian airstrikes on a Damascus suburb killed more than 80 people on Sunday in one of the deadliest such raids of the four-year civil war, as fighting escalated in and around President Bashar Assad’s seat of power at a time when his overstretched forces have been losing ground elsewhere in the country.

The air raids struck the main market in Douma during rush hour, when hundreds of people were out shopping on the first working day of the week in Syria, activists said. The strikes appeared to have been launched in retaliation for the capture of an army base in a nearby suburb a day earlier by the Islamic Army rebel group, which enjoys strong support in Douma.

“This is an official massacre that was carried out deliberately,” said Rami Abdurrahman, who heads the Britain-based Syrian Observatory for Human Rights. He said warplanes fired a missile at the market and then launched another after people rushed in to retrieve the wounded.

Abdurrahman, whose group relies on a network of activists around the country, said a total of four missiles were fired on the market, killing 82 people and wounding more than 200. He said the death toll is expected to rise because many of the wounded are in critical condition.

The Local Coordination Committees, another activist group, said the air raids killed at least 100 and wounded about 300, adding that rescue workers are digging through the rubble in search of survivors. Discrepancies in death tolls immediately after an attack are common in Syria.

“The situation is catastrophic,” a Douma-based activist who goes by the name of Mazen al-Shami told The Associated Press via Skype. He said clinics in the area are full and many of the wounded are being rushed in civilian cars to other medical facilities since ambulances are overwhelmed. Al-Shami said mosque loudspeakers issued calls for residents to donate blood.

An amateur video posted online by activists showed some 40 bodies of men and boys lined up on the side of a street as more bodies were being brought in. Another video showed people helping the wounded leave the heavily damaged market area. The videos appeared genuine and corresponded to other AP reporting of the events.

Al-Shami said “the regime is targeting civilians to avenge” the capture of the army base, known as the “technical academy,” in the nearby suburb of Harasta on Saturday.

Douma is one of the largest suburbs of Damascus and has been held by rebels since the early days of Syria’s conflict, which began in March 2011 with mostly peaceful protests but escalated into a full-scale civil war after a massive government crackdown. The conflict has claimed more than 250,000 lives and displaced up to a third of Syria’s pre-war population.

The fighting in and around Damascus has escalated in recent days. Last week, rebels shelled the capital ahead of a visit by Iran’s foreign minister, killing more than 30 people.

Iran is a close ally of Syria’s government, and is preparing a peace initiative that would include a cease-fire and a power-sharing government. Assad would remain in the picture, pending internationally supervised elections, according to a Lebanese politician familiar with the proposal, who spoke anonymously because he was not authorized to divulge details of the plan.

Such efforts appear to have gained urgency as Assad’s forces have suffered a string of defeats in recent months, mainly in the northwestern Idlib province, where hard-line Islamic militant groups captured the provincial capital of the same name and the city of Jisr al-Shughour earlier this year.

The Islamic State group has also advanced against Syrian troops, capturing the central town of Palmyra, home to world-famous Roman ruins, in May.

Elsewhere on Sunday, fighting raged in the rebel-held mountain resort of Zabadani after a local truce collapsed a day earlier.

The pro-Assad Beirut-based Al-Mayadeen TV reported that the Syrian army and Lebanon’s Shiite Hezbollah group have decided to capture Zabadani through military force after the talks that aimed to evacuate fighters and civilians from the town failed.

In response to the truce breaking down, the rebels renewed their offensive against the northwestern Shiite villages of Foua and Kfarya, where they had earlier offered to relocate residents to other government-held areas as part of the Zabadani talks.