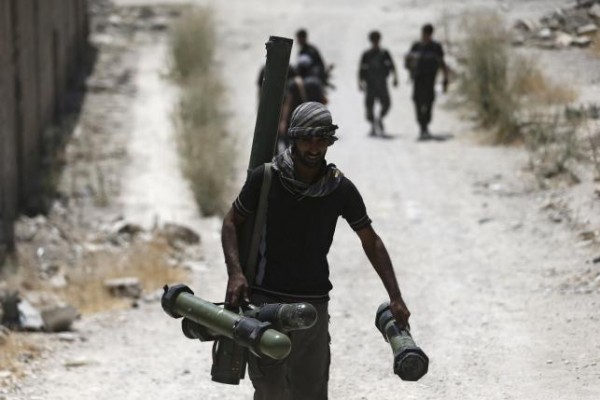 A fighter from the Free Syrian Army’s Al Rahman legion carries a weapon as he walks towards his position on the frontline against the forces of Syria’s President Bashar al-Assad in Jobar, a suburb of Damascus, Syria July 27, 2015. REUTERS/Bassam Khabieh
Share:
Syria’s warring parties declared a 48-hour ceasefire in two frontline areas on Wednesday after unprecedented mediation from Turkey and Iran, signaling a new approach by some of the main regional backers of the opposing sides.

The ceasefire halted fighting between insurgents on the one hand, and the army and its Lebanese militant Hezbollah allies on the other, in the rebel-held town of Zabadani and in a pair of Shi’ite Muslim villages in Idlib province.

The two areas are strongholds of each side under ferocious attack by the other. Sources familiar with the talks, which have been under way for weeks, said the truce could be extended to give time for ongoing negotiations aimed at evacuating civilians and combatants.

Three officials close to Damascus described the truce as a result of mediation by Turkey, which backs rebels fighting against President Bashar al-Assad, and Iran, whose support has been vital to his survival.

It adds to recent signs of new efforts in the region to end diplomatic deadlock over a conflict that has killed a quarter of a million people, made 10 million homeless, left swathes of Syria in the hands of Islamic State militants and divided the countries of the Middle East on sectarian grounds.

After four years in which diplomats made no headway toward peace, countries that support Assad and his opponents have been quietly discussing ways to end the war and tackle the common threat from Islamic State. But Assad’s fate remains a major obstacle to the new diplomatic effort.

Iran’s Foreign Minister Mohammad Javad Zarif arrived in Damascus on Wednesday and met with Assad. He was expected to discuss a new peace plan for Syria.

Before he arrived, rebels bombarded the capital with rockets and the government launched air strikes on nearby rebel positions. The Syrian Observatory for Human Rights, which monitors the war, said 13 people were killed and 20 wounded by the rebel rockets, and 31 killed in the government air strikes.

Sources on both sides of the civil war told Reuters earlier on Wednesday the truce was to begin at 6 a.m. (0300 GMT), and negotiations would continue. The rebel group Ahrar al-Sham had led the talks on the insurgents’ side.

“A ceasefire began at 6 a.m. today for 48 hours to halt military operations in Zabadani,” Hezbollah’s al-Manar TV reported. “It also includes the two villages of al-Foua and Kefraya in the Idlib countryside.”

Abu Walid al-Zabadani, a fighter with Ahrar al Sham in Zabadani, said: “We have stopped firing. It’s from both sides.”

“As fighters on the ground, we were not interested in this ceasefire, but it is led by our commanders and we have to abide by their orders,” he told Reuters from Zabadani. A second rebel said there were 200 injured insurgent fighters in the town.

Hezbollah said Islamic State gunmen had opened fire in Zabadani in an attempt to break the ceasefire but other insurgent groups had intervened to stop them.

Zabadani, about 45 km (30 miles) northwest of the capital Damascus and about 10 km from the border with Lebanon, has been the focus of a weeks-long offensive by the army and Hezbollah aimed at wresting control of the town from rebels.

The two Shi’ite villages of al-Foua and Kefraya, meanwhile, have been targeted in a parallel offensive by an insurgent alliance that includes both the Sunni Islamist Ahrar al-Sham and the al Qaeda-linked Nusra Front.

The United Nations envoy for Syria said last month that government air strikes had caused widespread death and destruction in Zabadani, and expressed concern that civilians were trapped both there and in the two Shi’ite villages.

Sources on both sides say negotiations are underway about a possible evacuation of civilians from the two villages, and a withdrawal of rebel fighters from Zabadani. The evacuation of the critically wounded had been agreed but logistics were still being worked out.

Ahrar al-Sham said last week it was holding talks with an Iranian delegation over Zabadani.

While years of diplomacy have so far made no progress toward ending the war, there are signs of a new push in recent weeks following Iran’s nuclear deal last month with major powers including both the United States and Russia.

Turkey, a major regional power and opponent of Assad, is revamping its strategy toward the Syria war. It is pressing for a buffer zone in Syria near its frontier, free of Islamic State fighters and controlled by opponents of Assad.

The Iranian nuclear talks saw the first direct, top level diplomacy between Iran and the United States since Iranian revolutionaries stormed the U.S. embassy in Tehran in 1979. Any progress on Syria could be seen as a major example of what both foes have said might be wider diplomatic benefits.

In Iraq, the United States and Iran are both supporting the government against Islamic State, with Washington providing air support and Tehran providing aid to government-allied Shi’ite militia on the ground.

In Syria, the United States and regional powers including Turkey and Saudi Arabia say Assad must go as part of any settlement. Iran and Russia have stuck by him.

Underscoring the divide between Assad’s foreign friends and enemies, Russia and Saudi Arabia failed in talks on Tuesday to overcome differences over his fate.

But the fact that such talks are taking place at all is a sign of progress after the years of diplomatic stalemate.

The war has turned Syria into a patchwork of areas run by an array of armed groups including the ultra-hardline Islamic State, a well-organized Kurdish militia, the Nusra Front and other rebels who espouse a nationalist agenda.

The Observatory estimates Assad’s control at around 25 percent of Syria, including its most populous areas such as the capital, Damascus.

The government has been losing ground in recent months, which Western officials say should encourage Assad to negotiate. He showed no sign of a willingness compromise in a speech last month.
REUTERS