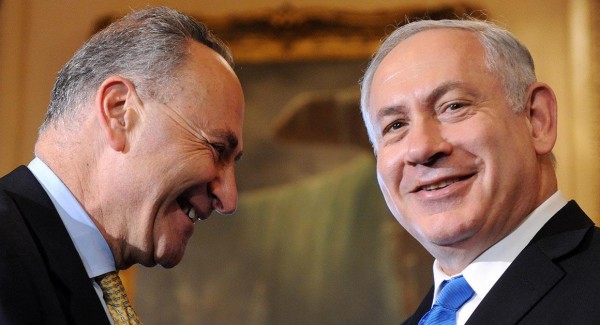 Senator Charles Schumer (D-NY) talks with Israel’s Prime Minister Benjamin Netanyahu(R) during a photo-op with US Senate leaders on March 23, 2010 on Capitol Hill in Washington, DC. Schumer delivered a blunt message last March to the White House : He would join a growing chorus of senators defying the wishes of President Barack Obama by demanding that Congress have an official say over any nuclear deal with Iran (Photo credit should read TIM SLOAN/AFP/Getty Images)
Share:

Sen. Chuck Schumer, a New York Democrat expected to be the party’s next leader in the Senate, said he will oppose the Iran nuclear deal in spite of President Barack Obama’s intense lobbying in favor of the accord.

The deal, struck last month with Tehran and Western powers, would curb Iran’s nuclear program in exchange for billions of dollars in relief from crippling sanctions.

“The very real risk that Iran will not moderate and will, instead, use the agreement to pursue its nefarious goals is too great,” Schumer said in opposing the pact. He said he based his decision on the nuclear and non-nuclear elements of the accord and on the question, “Are we better off with the agreement or without it?”

A leading Jewish Democrat, Schumer was the first senator of Obama’s party to step forward to oppose the deal. His announcement Thursday night came just hours after two other Senate Democrats — New York’s Kirsten Gillibrand and New Hampshire’s Jeanne Shaheen — announced their support for the international accord.

“After deep study, careful thought and considerable soul-searching, I have decided I must oppose the agreement and will vote yes on a motion of disapproval,” he said in a statement issued weeks before he will cast a vote.

Schumer’s decision was a blow to the administration, though it remained to be seen how many other Democratic lawmakers would follow the New York senator. He informed the White House of his decision Thursday afternoon. New York Rep. Eliot Engel, who is Jewish and the top Democrat on the House Foreign Affairs Committee, said in a statement that he too would oppose the deal.

Schumer’s split with Obama was remarkable for a senior leader in line to replace Senate Minority Leader Harry Reid, D-Nev., after he retires at the end of next year. His decision also put him at odds with the Democrats’ likely presidential nominee, Hillary Rodham Clinton, who has cautiously embraced the deal.

The Senate’s No. 2 Democrat, Dick Durbin of Illinois, supports the accord and has been working hard to persuade lawmakers to do the same.

The administration, which has lobbied intensely for the pact, has secured the backing of more than a dozen Senate Democrats and more than two-dozen House Democrats, including Minority Leader Nancy Pelosi, D-Calif. Republicans, who control the House and Senate, have been uniformly opposed to the deal.

“There are some who believe that I can force my colleagues to vote my way,” Schumer said. “While I will certainly share my view and try to persuade them that the vote to disapprove is the right one, in my experience with matters of conscience and great consequence like this, each member ultimately comes to their own conclusion.”

Schumer had been under pressure as a congressional ally of Israel, leading fundraiser and strategist for his party, and lawmaker from a state that is home to more than a million-and-a-half Jews.

He complained that the pact does not allow inspections “anywhere, anytime” and that the United States cannot demand inspections unilaterally.

Schumer joined a handful of Jewish Democrats who have announced their opposition — Reps. Steve Israel and Nita Lowey of New York and Ted Deutch of Florida. Michigan Rep. Sander Levin, however, has endorsed the deal.

The powerful pro-Israel lobby American Israel Public Affairs Committee (AIPAC)  is vehemently opposed to the deal, which Israeli Prime Minister Benjamin Netanyahu has denounced as undermining the security of Israel and the region. Opponents of the pact have targeted Schumer in campaign-style ads.

The media-friendly Schumer made the announcement through the blog Medium, not in a high-profile speech on the Senate floor like several of his colleagues. His statement also was posted as much of the political world was focused on the first Republican presidential candidate debate.

The announcement came hours after the Senate left Washington for its recess. The move spared Schumer weeks of intense lobbying from proponents and foes of the deal.