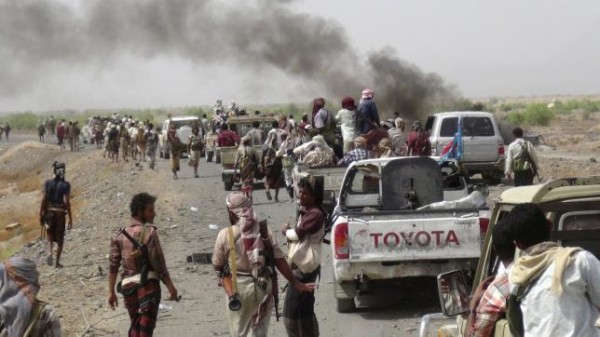 Fighters loyal to Yemen’s President Abd-Rabbu Mansour Hadi gather on a road leading to the al-Anad military and air base in the country’s southern province of Lahej August 3, 2015. REUTERS/Stringer
Share:

Fighters loyal to Yemen’s exiled president Abd-Rabbu Mansour Hadi, bolstered by Gulf Arab support, seized the country’s largest military base from Houthi forces on Monday after heavy combat in which dozens were killed or captured, a pro-Hadi commander said.

If confirmed, the victory would mark another significant gain for the Hadi loyalists after they drove the Houthis from the southern port of Aden in July following months on the defensive.

The recapture of the al-Anad base also opens up the road north to the city of Taiz, where Iranian-allied Houthi militias have been locked in combat with local fighters siding with Hadi.

Hadi remains in Saudi Arabia, where he fled in March as the Houthis closed in on his refuge in Aden. The Houthis had broken out of their northern strongholds and seized control of the capital Sanaa in September, plunging Yemen into another bout of conflict.

“The national army and the popular resistance have completed control of the al-Anad military and air base,” the operation commander, Brigadier-General Fadel Hassan, told Reuters by telephone. 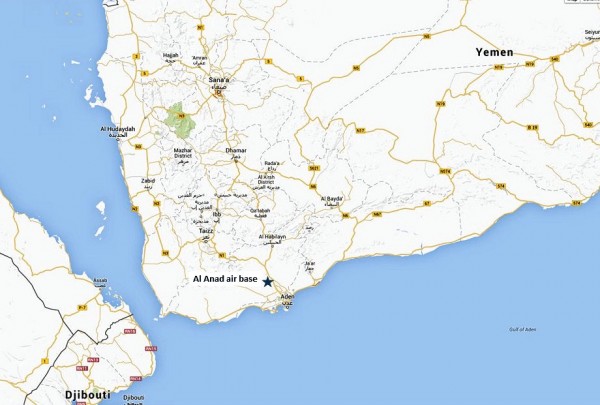 He said dozens of Houthis were killed or captured during hours of clashes, while hundreds have fled. His forces were combing the base, which covers an area of 40 square km (15 square miles) for any Houthis who may have remained behind.

He said his force would march on to complete the “liberation” of the provinces of Lahej and Abyan.

There was no word from the Houthis on the outcome of the battle. The Houthi-run Saba news agency said earlier that Saudi-led air raids had repeatedly struck the military base.

The base has been under siege for weeks by the Southern Resistance, an alliance of southern groups including secessionists seeking an independent south Yemen.

The assault began after new weapons, including armored vehicles that had been supplied by Saudi Arabia and the United Arab Emirates, arrived to reinforce fighters.

Witnesses said they saw dozens of new armored vehicles heading in two separate columns in the morning toward al-Anad.

The Houthis say their campaign is a revolt against corruption and an attempt to root out the influence of al Qaeda in Yemen.

Saudi Arabia, which has weighed in with support for Hadi, says the conflict is a proxy war in Iran’s efforts to expand its influence in the region.

The conflict has caused international concern due to Yemen’s proximity to Saudi Arabia, the world’s biggest oil exporter, and because Islamist militants have been operating from there. The United States was heavily involved in anti-militant operations until the Houthi revolt forced its personnel to leave.

Yemeni Vice President Khaled Bahah arrived in Aden on Saturday, the most senior official from the exiled government to visit since the Houthi retreat.

“The fleeing Hadi committed high treason when he summoned Saudi and foreign intervention…He must be tried, must be transferred to the International Criminal Court for the crimes he committed, and this is what we are seeking.” Saleh said in remarks published on Monday by the Huffington Post website,

Army units loyal to Saleh have fought alongside the Zaydi Shi’ite Houthis throughout the conflict.