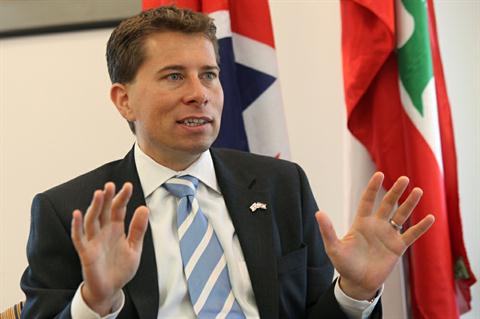 Lebanon has often been the butt of jokes of many of its citizens frustrated with its political stagnation. Having an incredibly free press compared to its regional neighbours, media programmes saturate the airwaves with squabbling politicians and pundits and political satire making fun of corrupt and incompetent politicians.

In recent weeks, many jokes have circulated on social media over the piles of uncollected garbage across the country due to the latest political squabble.

While Lebanese are known for their humour and self-deprecation, social media users have also expressed their dismay over such posts highlighting Lebanese failures, arguing that people are quick to point out the country’s faults without appreciating the beautiful things the country has to offer.

That is why, perhaps, the British ambassador’s farewell letter to Lebanon has been widely shared over the past few days on many Lebanese Facebook and Twitter pages. In the emotional and heart-felt piece, Tom Fletcher encourages Lebanese to look beyond the political chaos and to the bigger picture.

“Your politics are also daunting, for ambassadors as well as Lebanese citizens. When we think we’ve hit bottom, we hear a faint knocking sound below. Some oligarchs tell us they agree on change but can’t. They flatter and feed us. They needlessly overcomplicate issues with layers of conspiracy, creative fixes, intrigue. They undermine leaders working in the national interest. Then do nothing, and blame opponents/another sect/Sykes-Picot/Israel/Iran/Saudi (delete as applicable). They then ask us to move their cousin’s friend in front of people applying for a visa. It is Orwellian, infuriating and destructive of the Lebanese citizens they’re supposed to serve. But this frustration beats the alternative — given potential for mishap, terror or invasion, there is no substitute for unrelenting, maddening, political process,” he wrote.

He goes on to illustrate the wonderfully weird paradoxes that gives Lebanon its unique character when he writes: “Bullets and botox. Dictators and divas. Warlords and wasta.”

He reasons that the country, despite the regional chaos surrounding it, has remained afloat.

“When the Middle East was in flames, and its people caught between tyrants and terrorists, the Lebanon I will remember sent its soldiers to protect the borders; confronted daily frustrations to build businesses and to educate its children; and showed extraordinary generosity to outsiders, be they ambassadors or refugees. The Lebanon I will remember is not asking for help, but for oxygen.”

While highlighting a long range of emotions he experienced during his four-year tenure (seduction, frustration, exhilaration, exhaustion, disaffection, infatuation, addiction, resignation), he ends his letter on an optimistic note.

“Many of you ask me why I remain positive about this country. All I ever tried to do was hold a mirror up and show you how beautiful you really are. Shine on, you crazy diamond.”