Jordan refugee camp for Syrians is now a bustling city 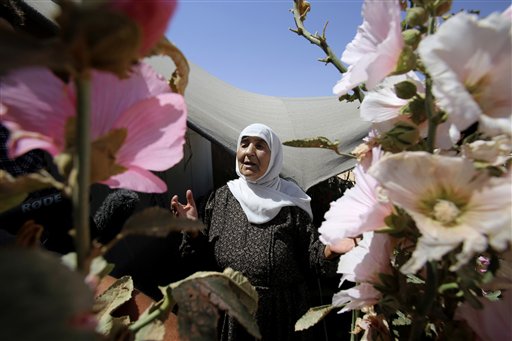 In this Wednesday, July 29, 2015 photo, an elderly Syrian refugee woman stands outside her shelter surrounded with flowers she planted, at Zaatari refugee camp, in Mafraq, Jordan. On Zaataris anniversary this past week, the transformation from tent camp to city symbolizes the failure of rival world powers to negotiate an end Syrias war. But some say its also a reminder that the shift from emergency aid to long-term solutions, such as setting up a water network to replace expensive delivery by truck, should have come much sooner. (AP Photo/Raad Adayleh)
Share:
Only empty desert three years ago, the Mideast’s largest camp for Syrian civil war refugees has grown from a town of tents into a bustling city.

But behind the plans is a cold reality for the 81,000 exiles living in the Zaatari Refugee Camp: The conflict back home, now its fifth year, won’t be over anytime soon.

Some deal with that reality by making the best of life in exile, like the Zaatari high school senior who studied hard in cramped quarters to win a university scholarship, or the former farmer who planted a garden because he was tired of looking at the desert.

But dozens of others leave every week to go back to Syria, saying it’s better to risk death than live in limbo in a camp where jobs are few, a third of children don’t attend school and thousands of young adults lack the chance to learn a trade.

“As time passes, yes, we can deal with the infrastructure,” said camp boss Hovig Etyemezian, a grandson of Armenian refugees and displaced as a boy in the Lebanese civil war. However, he’s “a long way from being confident” that enough is being done to save this refugee generation.

Zaatari, born out of necessity in the desert on July 28, 2012, is now the ninth-biggest city in Jordan, a stalwart U.S. ally. Today, this tiny kingdom hosts 629,000 Syrian refugees, out of a regional total of more than 4 million. Over 100,000 live in camps in Jordan, including 20,000 in the newer Azraq refugee camp, while the rest struggle to survive in cities with U.N. cash and food assistance.

International agencies had to reduce aid amid severe funding shortages and further cuts were announced Friday. Urban refugees could soon face the hard choice of moving into a camp where life is cheaper — only Azraq is taking newcomers — or returning to Syria.

On Zaatari’s anniversary this past week, the transformation from tent camp to city symbolizes the failure of rival world powers to negotiate an end Syria’s war. But some say it’s also a reminder that the shift from emergency aid to long-term solutions, such as setting up a water network to replace expensive delivery by truck, should have come much sooner.

In Zaatari, one money saver, the solar power plant, won’t be ready before the end of 2016. Until last year, the U.N. paid a $1 million a month for electricity in Zaatari, where residents run cables from pre-fabricated shelters and shops to a grid intended only for street lighting.

The rolling blackouts are a staple of camp conversation, along with the question of whether to stay or go back to Syria. Last week’s anniversary went unmarked.

The number of returnees has dropped to about 30 a day, a fourth of what it was before the outbreak of major fighting several months ago in Syria’s southern Deraa province, where many Zaatari residents are from.

On Wednesday, Emad Issawi, his wife Nihad and their three young children stood along the camp’s perimeter road with a pile of bags, waiting to catch a bus to the Syrian border. Those who leave are rarely allowed back.

Nihad, 23, her face covered by a black veil, said she reluctantly deferred to her husband’s wishes to go back. “I’m scared,” she said.

Across the street, Mohammed Hariri, 45, said he is returning to Deraa after one of his daughters assured him their village is relatively safe.

“I cannot be here, my patience is zero now,” he said.

Others try to make the most of life in exile.

Al-Sheik and family members fled Eastern Ghouta, a Damascus suburb, after chemical attacks by the Syrian government there two years ago. Fighting destroyed their homes.

Al-Sheik, who farmed five acres of vegetables back home, said the garden “makes everything a little better.”

Some invested systematically in their new lives.

Abdel Mutalleb Hariri enrolled his six children in camp schools immediately after arrival in January 2013. Unable to work as a veterinarian, he now sells clothes while his wife, Fatmeh, teaches English in grade school.

Their oldest, 19-year-old Alaa, won a scholarship and finished her first year at nearby Al al-Bayt University.

“Education is the way, especially if you live in a camp,” said Alaa, one of just a few in her age group to finish high school. Most drop out, some because they can’t afford university.

The camp has opened some new possibilities.

For hundreds of girls, life in Zaatari has meant a chance to play football. On a recent afternoon, about two dozen girls in headscarves practiced on an enclosed dirt pitch under the watch of coach Nour al-Dhaher, a pregnant mother of three in a robe and a black face veil.

Al-Dhaher initially enrolled in a coaching course to support her family. Now she loves watching her players transform from bashful to outgoing.

“Shoot! Shoot!” she yelled from the bench, cradling another coach’s baby.

For others, doors are closing.

There’s been a rise in early marriages, residents and camp officials say. Some families marry off girls in their mid-teens, often to ease their economic burden.

“Here you have to get married young because the situation is difficult,” said Sabrine al-Masaad, who runs a bridal shop. One of her recent brides was just 14 years old.

All the while, a new generation of Syrians is born far from their hometowns.

Maan Turkman, 31, gave birth in her shelter early Wednesday, just after the camp’s third anniversary, because the ambulance was late. Hours later, twins Mohammed and Ahmed lay asleep in a clinic’s bassinets, swaddled in blankets, joining another child born 16 months earlier in Zaatari.

Asked for her hope for them, she said: “I wish them a bright future in Syria.”
ASSOCIATED PRESS/ MY WAY