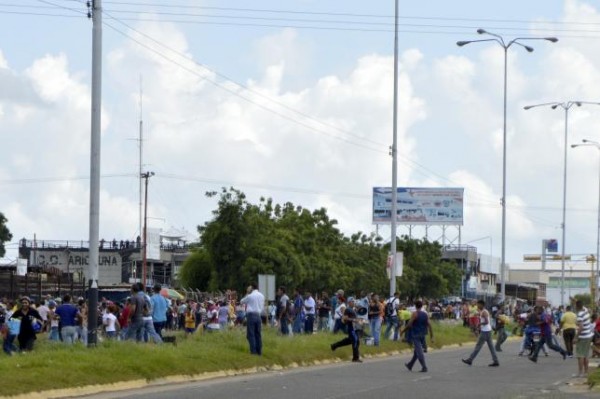 People carry goods looted from a supermarket in San Felix in the state of Bolivar, Venezuela July 31, 2015. REUTERS/Wilmer Gonzalez
Share:

One person was killed and dozens were detained following looting of supermarkets in Venezuela’s southeastern city of Ciudad Guayana on Friday morning, according to Venezuelan authorities.

President Nicolas Maduro said the violence was premeditated and blamed the United States as being behind it.Maduro said U.S. General John Kelly, Marine Corps commander of the Southern Command, predicted in February that there would be a “social implosion” in Venezuela in July.

“You all know that a military general of the United States doesn’t predict,” Maduro said on state television. “He orders and the battered Venezuelan right-wing executes.”

Speaking at the Pentagon in March, Kelly said that Venezuela might see some change of leadership in the coming months.

“I certainly am not involved in any way, shape or form with coup planning. I don’t know anyone that is. And I probably would know if someone was,” he added, according to a Pentagon transcript.

Shops in the area surrounding the warehouse were either shuttered or protected by national guard and police on Friday.

The Venezuelan government has long blamed opposition leaders and businesses for the country’s ills, saying they are waging an “economic war” against the government with backing from the United States.

Critics say the problems are due to a failing state-led economic model.

Low oil prices and an increasingly dysfunctional set of currency and price controls have spurred shortages of consumers goods, causing tempers to flare in supermarket lines across the country.

“A group of armed motorcyclists arrived and said they were going to loot certain establishments,” he told Venezuelan television station Globovision. “I’m sure it wasn’t spontaneous but rather planned with a political motive.”

Gustavo Patinez, 21, died of a gunshot wound to the chest, Correo del Caroni reported, adding that 60 people were detained.