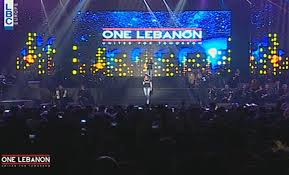 For the second  year in a row, more than 30 Lebanese celebrities sang and performed ONE LEBANON-United for Tomorrow concert to mark the 70th anniversary of the   Lebanese army.

The concert was held at the Forum de Beirut where Lebanese celebrities sang and performed  and raised  funds for  the children of the martyred Lebanese soldiers.

ONE LEBANON is an annual solidarity concert and a volunteer movement supported by Lebanese who wish to be united through music, comedy, arts, and sports.

The event united the Lebanese channels and was broadcast on  MTV, LBC, Future, OTV, Al- Jadeed and Tele Liban.