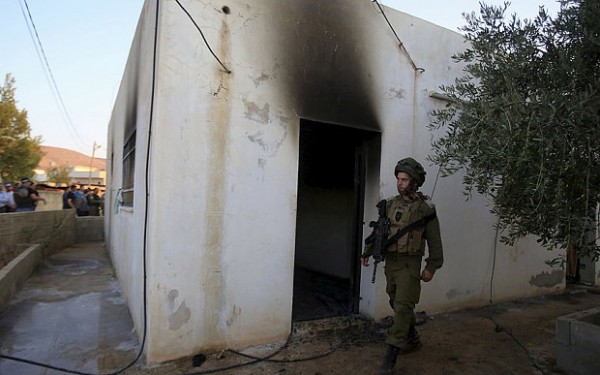 An Israeli soldier walks past a house that had been torched in a suspected attack by Jewish extremists killing an 18-month-old Palestinian child, injuring a four-year-old brother and both their parents at Kafr Duma village near the West Bank city of Nablus July 31, 2015. Photo: Reuters
Share:

An 18-month-old Palestinian baby died and its parents were injured in a fire started by Israeli settlers in the West Bank, Palestinian security officials said Friday.

“The fire and the murder of the Palestinian toddler is an act of terrorism,” Yaalon said in a statement, after the attack in the village of Doma, near Nablus.

“We will not allow terrorists to take the lives of Palestinians.”

Four settlers set a house on fire at the entrance of the village and scrawled graffiti on a wall before fleeing to a neighbouring settlement, the sources said.

Extreme-right Israeli activists have committed acts of vandalism and violence against Palestinians and Arab Israelis for years, attacking Christian and Muslim places of worship and even Israeli soldiers.

The attacks are known “price tag” violence — a euphemism for nationalist-motivated hate crimes by Jewish extremists aimed at Arab property.

West Bank settlements are major impediments to peace negotiations with the Palestinians, who see the land as part of a future independent state, and Western nations have called on Israel to halt such projects.