Bomb that killed 2 policemen in Bahrain linked to Iran, report 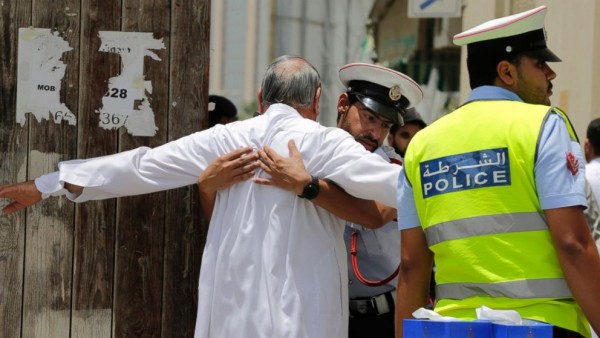 Bahraini community police officers search worshipers outside a Shiite Muslim mosque ahead of mid-day prayers in Manama. Bahraini authorities say two policemen have been killed and many injured in a bomb that resembled some seized at the weekend that authorities say were smuggled in from Iran.
Share:

A bomb killed two policemen and wounded six in the deadliest such attack in Bahrain in months, and state media said the explosives resembled some seized at the weekend that authorities say were smuggled in from Iran.

Sunni-ruled Bahrain has long accused Iran of stirring up unrest among its Shi’ite population and tensions between the two sides have risen in recent days, with Bahrain recalling its ambassador from Tehran on Saturday.

A nuclear deal reached this month between Tehran and global powers has also set its Gulf Arab neighbors on edge, who fear less foreign pressure on Iran due to the deal could embolden its foreign policy on their turf.

The bombing outside a girls’ school in the Shi’ite village of Sitra was the first in Bahrain for several months, and the worst since March 2014, when a blast killed three policemen. Iranian officials have not commented on Tuesday’s bombing.

Tehran denies interference in Bahrain but openly supports opposition groups seeking greater rights for the Shi’ite majority. Sporadic violence aimed at Bahraini security forces has become the norm since mass, Shi’ite-led pro-democracy protests were put down by the government in 2011.

The force of the blast ripped a large hole in the wall of the school, which was closed for the summer holidays, a Reuters witness said.

Al Wefaq, Bahrain’s largest Shi’ite opposition movement, condemned the attack in a statement on its website, saying “such acts are alien to the wide peaceful popular movement which is demanding a democratic transition in Bahrain”.

Sunni Gulf rulers are also deeply critical of Iranian involvement in regional conflicts in Iraq, Syria and Yemen, and accuse Tehran of contributing to the increasingly bitter sectarian rift between Sunnis and Shi’ites.

In a message posted on his Twitter account, Bahrain’s foreign minister, Sheikh Khalid bin Ahmed al-Khalifa, suggested there was no difference between Sunni or Shi’ite Islamist militants, adding: “Their goal is the same, and their reference point is Iran”.

BNA said the explosives were similar to those seized by security forces on Saturday, which the government says were smuggled into the country by two Bahrainis with links to Iran.

Bahrain also recalled its ambassador to Tehran for consultations on Saturday after what it said were repeated hostile statements made by Iranian officials.

Iran’s Foreign Minister Mohammad Javad Zarif called on Sunday for a united front among Middle Eastern nations to fight militancy during a visit to Kuwait.

Iran’s role in the region was unpredictable due to internal divisions, said Aimen Dean, Managing Director of the Five Dimensions consultancy.

“There is one foreign policy pursued by (President Hassan) Rouhani and Zarif, and another pursued by the IRGC and the Qods Force,” he said, referring to powerful revolutionary factions not accountable to the elected government.