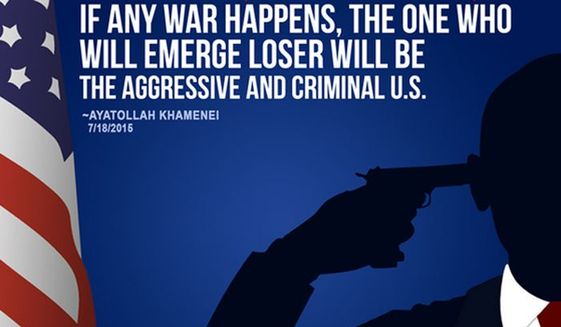 Iran’s supreme leader tweeted a graphic Saturday that appears to depict President Obama holding a gun to his head as Britain relaxed its travel advice to the nation, citing decreased hostility under the Iranian government.

“US president has said he could knock out Iran’s military. We welcome no war, nor do we initiate any war, but..” reads the caption above the tweet sent by Ayatollah Ali Khamenei on @khamenei_ir, his English language account.

The latest tweet on Khamenei’s account mirrors a similar one sent July 17 that didn’t contain an image, but said: “US pres. said he could knock out Iran’s army. Of course we neither welcome, nor begin war, but in case of war, US will leave it disgraced.”

That tweet came just three days after the United States and other world powers reached a historic agreement with Iran that called for limits on Tehran’s nuclear program in return for lifting economic sanctions that have crippled Iran’s economy.

Meanwhile, the British government eased its travel advice to Iran on Saturday, saying it no longer advises “against all but essential travel to the rest of Iran” and has “updated our advice to provide greater clarity on the risks that may affect British nationals traveling to Iran.”

The government still maintains its advice to avoid travel in some areas, particularly along Iran’s borders. “Our policy is to recommend against travel to an area when we judge that the risk is unacceptably high. We consider that continues to be the case for specific areas of Iran, notably along Iran’s borders with Iraq, Afghanistan and Pakistan,” British Foreign Secretary Philip Hammond said in a statement.

“But we believe that in other areas of Iran the risk to British nationals has changed, in part due to decreasing hostility under President Rouhani’s government,” he added