Hezbollah chief: Iran won’t abandon us and U.S. will remain the ‘Great Satan’ 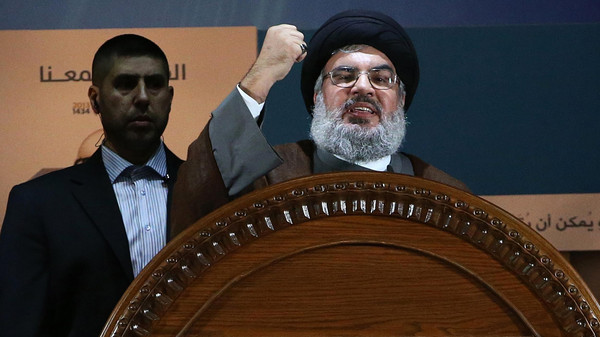 The Lebanese Hezbollah group said Washington will remain the “Great Satan” following nuclear deal with world powers and it can still count on Iran’s support, its leader Sayyed Hassan Nasrallah said on Saturday.

In his first public remarks since the agreement was reached this month in Geneva, Nasrallah said he was sure Tehran would confound critics who say it would end support to Hezbollah.

“Did Iran sell its allies down the river during the nuclear talks? No, there was no bargaining” between Iran and the United States, he said in a speech broadcast on a large screen to supporters in Beirut’s southern suburbs, a party stronghold.

Supreme leader “Ayatollah Ali Khamenei reiterated Iran’s position on the resistance movements and its allies, and Hezbollah occupies a special place among them,” Nasrallah added.

“The United States remains the ‘Great Satan,’ both before and after the nuclear accord” reached last week after tough negotiations between Iran and permanent U.N. Security Council members Britain, China, France, Russia and the United States, plus Germany.

On July 18, Khamenei warned that, despite the deal, Iran would continue its policy towards the “arrogant” United States and also its support for its friends in the region.

Founded in the 1980s by Iran’s Guardians of the Revolution and financed and armed by Tehran, Hezbollah has become a powerful armed party advocating armed struggle against Israel.

However, Rhodes said the additional money could possibly be used to funnel the activities of its allies in the region.

U.S. President Barack Obama himself admitted after the nuclear agreement was signed on July 14 that “even with this deal, we will continue to have profound differences with Iran” with respect to “its support of terrorism and its use of proxies to destabilize parts of the Middle East.”

The Iran nuclear deal sees Tehran curbing its nuclear program – an allegation it has long rejected – in return for the lifting of the sanctions slapped on by the U.S., U.N. and EU.

The deal also sees the almost immediate lifting of more than $100 billion in sanctions.

Nasrallah stressed Saturday that newly issued sanctions by the U.S. against the party’s officials were only aimed at targeting the Lebanese in general .

“Sanctions on Hezbollah members don’t make a difference because they neither have money nor have made deposits in banks worldwide,” Nasrallah said .

“We are proud to be sanctioned by the U.S. which will remain the great Satan after the nuclear deal with Iran,” he said from the Shahed Educational Complex in Beirut’s southern suburbs.

On Tuesday, the U.S. Treasury Department slapped sanctions on three Hezbollah leaders and a Lebanese businessman.

The action freezes the U.S. assets of all four and prevents Americans from engaging in transactions with them, it said.

But Nasrallah said that Lebanese businessmen and businesses are being targeted by the sanctions.

“The state and government have a responsibility in protecting the Lebanese but they are not doing so,” he stated.

“Since 1982 and since the launch of the resistance, there has been an effort by the U.S. and Israel through the cooperation of some Arab countries and some Lebanese tools to smash the resistance and if not possible to contain it and weaken it,” stated Nasrallah.

After the nuclear deal, Obama reiterated that Hezbollah is a terrorist organization and stressed that the U.S. policy is aimed at confronting Hezbollah to appease Israel, he said.

“There has been an objective to end the role of the resistance in Lebanon. But they have failed,” Nasrallah said.

Nasrallah also tackled in his speech, the garbage crisis which he described as “proof of a catastrophic failure.”

“Is there a transparent management which is willing to collect waste with the least cost?” he asked. “I don’t think so.”

Uncollected trash has been piling up in the streets of Beirut and Mount Lebanon since last weekend when Lebanon’s largest landfill that lies in the town of Naameh south of Beirut was shut down.

FPM
Nasrallah also urged his rivals to engage in dialogue with his allies in the Free Patriotic Movement to resolve the country’s political crisis.

“The country will head towards vacuum,” he warned, saying the Future Movement should hold talks with the FPM to “listen to its demands.”

The FPM has been seeking a change in the government’s decision-making mechanism after accusing Prime Minister Tammam Salam of infringing on the authorities of the president.

“We don’t want the government to collapse,” said Nasrallah, adding that warnings about a possible resignation by Salam would lead to more vacuum.

Lebanon has been without a head of state since Michel Suleiman’s six-year term ended in May last year.