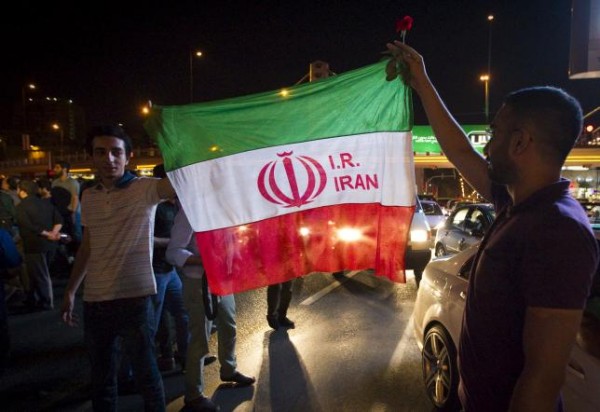 Iran’s security hawks have begun sniping at their country’s historic nuclear deal, emboldened a day after Supreme Leader Ayatollah Ali Khamenei described some of the world powers that signed it as “untrustworthy”.

Khamenei’s remark will be understood by Iranians to refer largely to the United States and Britain, the “Great and Little Satans” long reviled by Iran’s revolutionary theocracy for their support of the Shah, overthrown in 1979.

The comment carries weight, because the conservative cleric is the ultimate arbiter of high state policy under Iran’s unwieldy dual system of clerical and republican rule.

Khamenei did voice guarded appreciation of the deal, saying it was significant, and urged calm, perhaps alluding to surging popular hopes for an end to Iran’s isolation, or to strains between the supporters of the deal and its critics.

But his downbeat, measured tone was in contrast to lavish praise for the agreement from pragmatic President Hassan Rouhani and his Western-educated foreign minister, Mohammad Javad Zarif.

Figures close to Khamenei lost little time in taking aim at the accord, which lifts sanctions on Tehran in return for Iran accepting long-term curbs on a nuclear program that the West has suspected was aimed at creating a nuclear bomb.

PACT WITH THE DEVIL?

One saw worrying discrepancies between the U.S. and Iranian interpretations of what had been agreed.

“The Iranian fact-sheet of the conclusion of the deal issued by the foreign ministry had significant differences with what America’s president mentioned in his remarks,” Mohammad Kazem Anbarlui wrote in an editorial for the conservative newspaper Resalat.

“The fact-sheet of the rival shows that Iranian red lines, particularly about the lifting of sanctions, have not been observed. The phrases and words used in the text contain parentheses and it is loaded with interpretable, ambiguous or multi-meaning expressions,” he added.

Some conservatives believe reaching a deal with Washington is tantamount to a pact with the devil.

While Khamenei will have the last word on the deal, hardliners want the text subjected to rigorous scrutiny when it is submitted for consideration to parliament and the National Security Council.

These critics had a mild but visible presence in the streets on Tuesday when the deal was announced.

An eyewitness told Reuters that, in the Karaj suburb of Tehran, a man who was handing out sweets to people for “nuclear victory” was shoved and roughed up by long bearded men who looked like members of the hardline Basij militia.

Another eyewitness told Reuters that Basij on motorbikes made their presence felt in the affluent Vanak Square in north Tehran to show dissatisfaction with street jubilations. They were outnumbered by young people dancing. No clash was reported.

Security hardliners such as the Basij and the leaders of the Revolutionary Guards Corps carry real clout.

Conservative leaders of the Guards opposed many policies of reformist president Mohammad Khatami, who served from 1997 to 2005, and helped to scuttle his boldest initiatives.

The Guards and the Basij also helped suppress huge street protests that followed the disputed re-election of hardline president Mahmoud Ahmadinejad in 2009.

The two organizations are part of Iran’s unwieldy system of competing power structures, some of which, like the Guards, have their own business empires.

Critics of Rouhani’s outreach to the West started their political campaign last year, announcing their concerns about Tehran’s possible concessions in nuclear negotiations. After a lavish conference titled “We are worried about a bad deal”, they have simply become known as “The Worried”.

While not a political party, “The Worried” is an umbrella term describing those with a deep affiliation with hardline conservatives and those who criticize Rouhani’s government.

They have doubts about the Rouhani’s government efforts to establish trust with the Americans. Zarif has said he would like the deal to open new horizons in Iran-U.S. relations to address what he called important “common challenges” in the region, especially the rise of Islamic State in Iraq and Syria.

Khamenei has not expressed support for that idea.

Last week, answering a student who asked him what would happen to the ‘fight against global arrogance’ after the completion of nuclear talks between Iran and world powers, Khamenei replied that “the U.S. is the true embodiment of global arrogance” and “the fight cannot be interrupted”.

“In contrast to what’s been said, this deal will not lead to cooperation between Iran and the U.S. in the region, but will increase the tension between them,” Mohammad Sarafi wrote in Kayhan, a newspaper closely associated with Khamenei.

“It’s not the first time that some traitors have tried to put make-up on the face of the Great Satan. They believe we should surrender to U.S. hegemony and whitewash their crimes.”

Reformists in Iran have called the nuclear deal a turning point in the history of the Islamic Republic, and the day the revolutionary slogan “Death to America!” became defunct.

Former President Akbar Hashemi Rafsanjani last week talked about the possibility of reopening the U.S. embassy in Iran if the deal were reached.

But in the short term at least, that appears unlikely.

“We should not forget Iran-U.S. relations are not an international issue. It has been taken hostage by domestic political rivalries in both countries and it will continue to be so.”