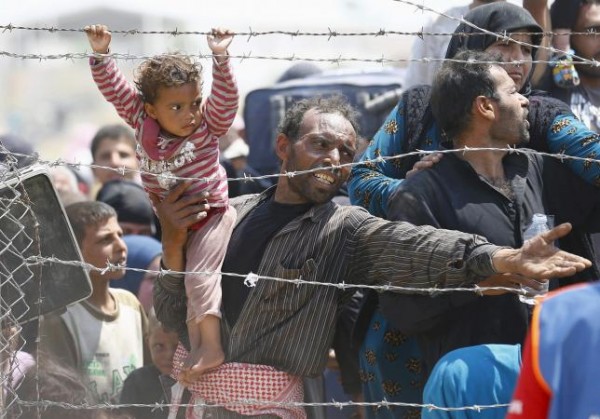 A Syrian refugee reacts as he waits behind border fences to cross into Turkey at Akcakale border gate in Sanliurfa province, Turkey, June 15, 2015. REUTERS/Umit Bektas
Share:

The number of Syrians who have fled abroad since the outbreak of civil war in their country has risen to more than 4 million, the largest number from any crisis in almost 25 years, the United Nations said Thursday.

A recent wave of people leaving Syria and an update of Turkish statistics confirm the tragic milestone, according to the U.N. refugee agency, UNHCR. The agency said in a statement that 7.6 million additional people are displaced from their homes within Syria.

“This is the biggest refugee population from a single conflict in a generation,” said U.N. High Commissioner for Refugees Antonio Guterres in a statement. “It is a population that needs the support of the world but is instead living in dire conditions and sinking deeper into poverty.”

The new figure shows that the flow of refugees is accelerating only 10 months after the agency recorded more than 3 million Syrians fleeing their country.

Turkey has seen much of the recent flow. In June alone, according to UNHCR, more than 24,000 people arrived from northern Syria amid fighting between the Islamic State group and Kurdish militants. The more than 1.8 million Syrians in Turkey have made it the biggest host of refugees in the world, an expensive undertaking that the country is bearing mostly out of its own treasury.

The dire situation in the region is pushing a wave of refugees to seek escape in Western Europe, taking increasingly risky paths as European countries resist the flow.

“We cannot afford to let them and the communities hosting them slide further into desperation,” Guterres said.