22 killed in ethnic clashes between Arabs, Berbers in Algeria 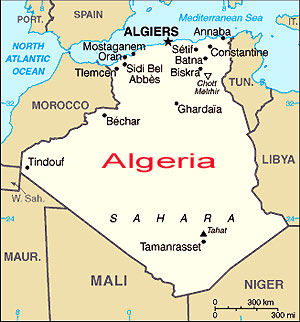 At least 22 people have been killed in ethnic clashes between Arab and Amazigh communities around the Algerian desert town of Ghardaia, with several businesses and homes burned down, medical sources and state media said on Wednesday.

The violence that erupted over the weekend was some of the worst in years in the flashpoint region where tensions often run high between Arabs and Mozabite Berbers – one of the Amazigh people of North Africa – competing for jobs, houses and land.

Security forces were sending reinforcements in a bid to calm renewed clashes that intensified on Monday and Tuesday night.

“Most of the victims died after being struck in the head by projectiles,” said one local official, who asked not to be named because he was not authorised to speak to the media. “We hope the situation will improve. Tribal leaders have been mediating.”

Fifteen people died of wounds on Tuesday night and another four people died of their wounds in hospital on Wednesday, a local medical source told Reuters.

Most Mozabites live in the desert region around Ghardaia province but some are based in northern areas.

About 70 Mozabites staged a rally in Algiers on Wednesday to urge authorities to take urgent measures to end confrontations there.

Some protesters carried banners that read ‘I, Ghardaia’ among others, witnesses said.

Three people had died on Monday, mainly in the small town of Guerrara, near Ghardaia, state media said.

Ghardaia, around 600 km (370 miles) from Algiers, is home to both Arabs and the Mozabite Berber, who speak their own language and follow their own school of Islam.

About 30 people were also wounded, including seven seriously, in the past two days, while several businesses, houses and cars were burned, medical and local sources said.

Ghardaia, a UNESCO world heritage site, has been at the epicenter of unrest between Arabs and Mozabite Berbers. The two groups compete over limited jobs, land and housing in the impoverished south.

Tensions escalated after a Mozabite cemetery was desecrated in December 2013. By October of last year, a dozen people had been killed and hundreds injured in clashes.