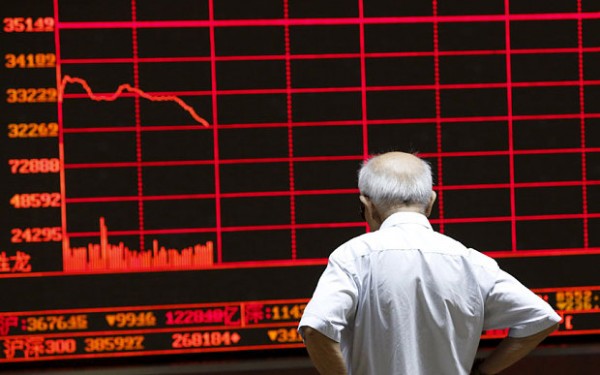 An investor watches an electronic board showing stock information at a brokerage office in Beijing,
Share:

Weeks of punishing losses on China’s stock markets have triggered questions about the Communist Party’s stewardship of the world’s second-largest economy — and whether it can maintain the population’s confidence if the crisis worsens.

China’s main stock markets closed up on Thursday, a welcome respite for investors after three weeks of plunging prices. But the rises did not come close to reversing recent falls. Since June 12, $3.5 trillion in value has been wiped off the Shanghai and Shenzhen Composites.

Experts agree that authorities are desperately trying to stabilize the markets because the Communist Party’s credibility is at stake. Until the market rout, many people simply didn’t understand that prices could fall. If their current unhappiness turns into unrest, the government will be forced to grapple with a political crisis as well.

According to analyst estimates, nearly 60 percent of Chinese companies have filed to have trading in their shares suspended — another indication of the magnitude of the problems.

“This is suddenly the most serious crisis that the [administration of President Xi Jinping] faces since coming to power in 2012,” said Willy Lam, a professor at the Chinese University of Hong Kong.

“All along [the Communist Party] have argued that it is possible to work on just economic reform without political reform, but now the current crisis has underscored the need for political reform,” Lam added, referring to the fact that the government has banked on economic prosperity trumping political change in the minds of its citizens. Xi’s administration has also become infamous for its crackdowns on dissent.

The market turmoil may also dent the Communist Party’s image with its citizens, according to Linda Yueh, an adjunct professor of economics at the London Business School.

“A serious knock to confidence while the economy is structurally slowing down is worrying,” she said.

China’s economy had been growing by up to 7 percent a year until recently, but there are signs that these rates are slowing.

The government has been trying to quell the rising panic on the markets by halting a slew of initial public offerings, easing restrictions on insurers trying to buy stocks, and pumping billions into the markets by lowering interest rates and expanding loans.

Beijing has also compelled brokerage firms to invest tens of billions in the market and ordered them not to sell until a pre-determined market value is reached.

Before Thursday, the dramatic steps failed to prevent the falls, which have been felt especially acutely by retail traders — everyday citizens with little formal education in finance — who were nudged into the market by the state-run media that promised a bull market and “golden era” of trading.

In just one year, the market capitalization of the Shanghai and Shenzhen has doubled.

Now that this bull market has gone to the bears, Beijing has to deal with the fact that it urged citizens to plow their money into equities.

“This bull market was engineered by the government,” said Oliver Rui, director of the CEIBS-World Bank China Center for Inclusive Finance, a business school.

The good news for the government — and investors — is that despite the astounding 30 to 40 percent falls, the Shenzhen and Shanghai indexes are still up 75 percent from 2014. What this means is that for the more than 90 million retail investors in China, the topsy-turvy market has not translated into millions losing their shirts.

Indeed, the Chinese “still park most of their wealth in cash and deposits,” with less than 15 percent of household income being invested in stocks, according to a report by HSBC Global Research.

So while the stock market’s rapid falls is unlikely to have a devastating impact on the Chinese economy, experts say the government still has to walk a fine line with its citizens.

He added: “This recent bull market is a typical example of hijacking this sentiment.”

So to allow the market to correct may lead to a healthier stock market and listed companies, but it risks making many Chinese feel hard done by. The investors that Beijing needs particularly to keep an eye on are those who have traded heavily on margin trading or borrowed money to trade.

These mainly retail investors stand to lose the most if the government stops propping up the market and allows it to correct, which raising the ugly specter of social unrest, anathema for a ruling party determined to maintain a firm grip on power, Rui added.

“It’s a time of soul searching for the Xi administration,” said Lam, the Hong Kong-based professor. “I think its possible that if the government pulls out all the stops it might be able to stabilize the market, but there is now evidence that ordinary Chinese stock buyers have lost faith in President Xi’s administration to handle economic and political reforms.”