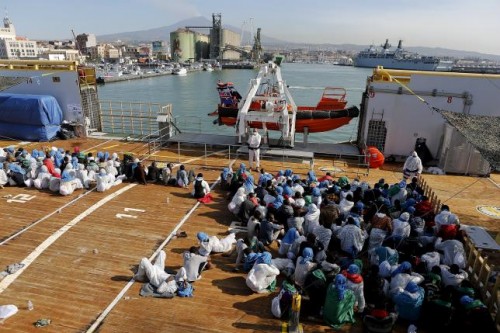 Migrants wait to disembark from the Norwegian vessel Siem Pilot at Catania’s harbour, Italy, June 30, 2015. REUTERS/Antonio Parrinello
Share:
More than 135,000 refugees and migrants have arrived in Europe by sea in the first half of 2015, with most of the burden being borne by countries in southern Europe, according to a new report by the United Nations High Commissioner for Refugees.

“Desperate people resort to desperate measures and unfortunately … the numbers are expected to continue to soar,” said Brian Hansford, a spokesperson for UNHCR.

The number of refugees and migrants arriving in Europe in the first six months of 2015 increased more than 80 percent increase from the same time period in 2014, the UNHCR report said.

It comes as European Union leaders remain divided over how best to solve the growing migrant crisis.

The increase in refugees and migrants, many braving dangerous Mediterranean waters in unsafe boats, has hit countries in southern Europe particularly hard, the report said.

Greece, the largest arrival point for refugees and migrants in the first six months of 2015, has a struggling economy and was headed for a default on loans with the International Monetary Fund.

Refugees and migrants have been pouring into the western Balkans from Greece and since the beginning of June, over 1,000 people have been entering every day “as opposed to 200 just a few weeks ago,” the report said.

Italian Prime Minister Matteo Renzi rebuked fellow EU leaders last week for failing to agree on a plan to take in 40,000 asylum-seekers from Italy and Greece.

“As arrivals increase, the reception capacity and conditions remain seriously inadequate,” Hansford said. “This is a regional problem that needs a regional response and regional solidarity.”

Syria, which has been embroiled in a civil war since 2011, accounted for nearly 44,000 people, making them the largest group coming to Europe’s shores. The report said instability in Libya was another reason for the increase.

Eritrea and Afghanistan were the second- and third-largest countries of origin, the report said.

The report added, however, that increased EU funding for rescue operations has meant a decrease in the number of deaths at sea since May.
REUTERS