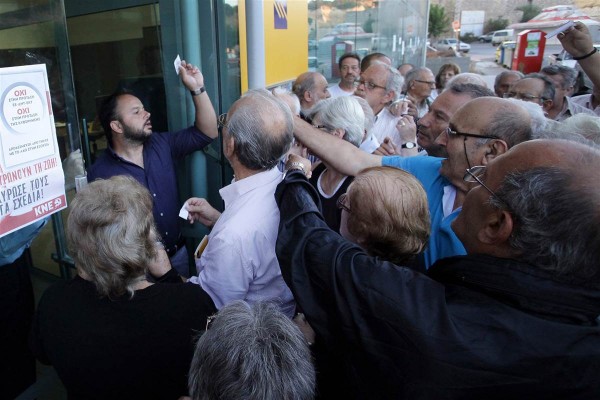 Retirees throughout Greece mobbed banks as they tried to withdraw a maximum of 120 euros ($134) in pension payments on Wednesday, as the country teetered on the brink of economic collapse hours after an international bailout expired.

Emotions ran high outside a Piraeus Bank branch in downtown Athens as some 60 customers jostled impatiently after waiting for hours in the sweltering sun.

“This is humiliating,” said Athanasios, an 80-year-old former army officer. “I used to receive a monthly pension of 1,500 euros and now I have to line up for hours to receive 120? This is unfair.”

Greece earlier failed to repay a loan to the International Monetary Fund (IMF). While Greeks are allowed to withdraw up to 60 euros ($67) from ATMs daily, the government announced on Tuesday that it would allow many retirees, many of whom do not have bank cards, to withdraw 120 euros from banks. Banks have been closed since Monday and are scheduled to reopen next week.

But on Tuesday evening, thousands gathered in front of the parliament building in Athens to show their support for the new bailout deal. Just 24 hours earlier, crowds calling for a “No” victory demonstrated in the same place.

NATO also weighed into the crisis as its secretary general saying that he expects Athens to honor its commitment to spend 2 percent of its GDP on defense.

“Defense spending is not the reason for the problems in Greece, the problems are much more complicated,” Jens Stoltenberg told NBC News’ German partner, ZDF.