One-third of world’s people still have no proper toilets, still a luxury 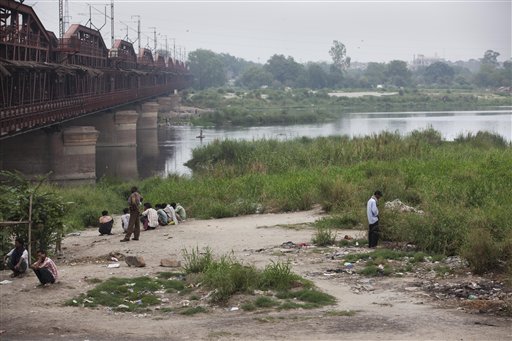 Those who make do without toilets continue to pollute water sources and jeopardize public health and safety for millions worldwide. That contributes to malnutrition and childhood stunting, impairing 161 million children both physically and mentally every year.

“Until everyone has access to adequate sanitation facilities, the quality of water supplies will be undermined and too many people will continue to die from waterborne and water-related diseases,” WHO’s public health department director, Dr. Maria Neira, said in a statement.

The joint report released Tuesday by the U.N. agencies evaluates progress on global targets set in 2000 for giving everyone access to clean drinking water and sanitation facilities, along with other goals in areas such as poverty, hunger, disease and inequality. With those benchmarks expiring this year, the United Nations is leading efforts to come up with a new set of “sustainable development goals” that are expected to focus on how some $2.5 trillion in development funds will be spent through 2030.

Past efforts to improve water and sanitation have seen some success, with 2.1 billion people gaining access to better sanitation facilities since 1990, according to the report. Yet, another 2.4 billion people have seen no improvement, including 946 million people still relieving themselves outdoors — the vast majority among the rural poor.

India is by far the worst culprit, with more than 640 million people defecating in the open, and not necessarily due to a lack of facilities. Many men who have installed toilets at home still prefer going outdoors as they survey their farmlands or seek a few minutes of quiet.

While successive Indian governments have pledged to install toilets in every home, little has been done to educate people about the dangers of unsanitary practices. Meanwhile, diarrheal diseases kill 700,000 children every year, most of which could have been prevented with better sanitation. India still needs to build some 100 million toilets to provide everyone access, but experts say the country also needs to invest more in campaigns to change behaviors. Instead, the government recently slashed its sanitation budget in half.

“There is a kind of a feeling among politicians that, if we ignore the problem it will go away,” said Nitya Jacob, who leads policy for the Indian branch of the international charity WaterAid. “And so we’ve had years of poor funding, poor quality equipment and poor solutions being offered to the poor.”

India is also a victim of its own population growth, with some 1.26 billion citizens now and counting. That “just wipes out any gains in sanitation, or on any development front,” Jacob said.

The world has done better in giving more people access to clean drinking water, with 2.6 billion people getting improved access since 1990.

Still, 663 million of the world’s poorest — more than the populations of the European Union and Russia combined — have seen no improvement at all. Instead, they are left to scavenge for water around broken pipes and stagnant ponds, may walk miles (kilometers) to the nearest spigot for clean water, or may be financially exploited by “water mafias” charging almost a full day’s wages for single cup of water.

Some experts in development issues cautioned against seeing the report as evidence of failure, noting that the tasks themselves were difficult and the goals ambitious.

“It’s important not to lose sight of the fact that things have gotten much better” even if the goals haven’t been met in full, said economist Bjorn Lomborg, founder of the Copenhagen Consensus Center economic think tank. For example, the world aimed to cut child mortality by two-thirds, but managed to reduce it only by half. “That’s still 6 million children now who don’t die every year. That’s still a big victory,” Lomborg said.

Lomborg and other economists have argued for a more systematic approach in spending future global development funds, by analyzing project costs and potential benefits in monetary terms to determine which would deliver the most “bang for the buck.”

Addressing sanitation and water woes, for example, is a clear priority but is relatively pricey at $45 billion a year, according to a Copenhagen Consensus evaluation done in recent months. It could potentially save around 350,000 people from premature deaths caused by infection and disease, and in economic terms provide $144 billion a year in benefits in terms of limiting health care costs or sparing losses in income. That works out to about $7 of benefit for every $1 spent. The less ambitious goal of just getting people to stop defecating in the open, however, would cost just $13 billion and yield $84 billion in economic benefits, or $6 for every $1 spent, the group concluded.

“It’s still a good use of resources, you’re still gaining,” Lomborg said. But given how many problems the world faces, from enduring hunger to diseases like malaria and tuberculosis, “it may not be the best use of limited resources.”