80 mosques to be closed in Tunisia for inciting violence 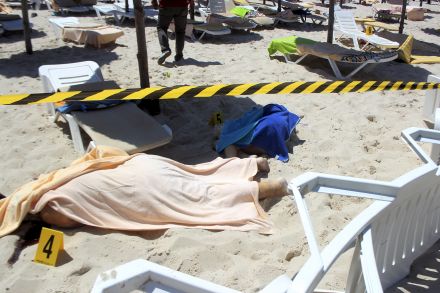 Tunisia plans within a week to close down 80 mosques that remain outside state control for inciting violence, as a countermeasure after the hotel attack that killed 39 people, Prime Minister Habib Essid said on Friday. PHOTO: REUTERS
Share:
Tunisia will shut down about 80 mosques accused of inciting violence, Prime Minister Habib Essid has said, after a beach attack that left 39 people dead.

The mosques, which operate outside state control, are spreading “venom” and will close within a week, he said.

On Friday a gunman opened fire on tourists in the resort town of Sousse.

Tunisians, Britons, Germans, Belgians, French and at least one Irish citizen were among those killed in the attack, claimed by Islamic State (IS).

The gunman was shot dead by police. Officials say he was a student not previously known to authorities.

This was the second major attack on tourists in Tunisia since March, when militants killed 22 people, mainly foreigners, at a museum in the capital.

Speaking at a news conference in Tunis, Mr Essid said: “Some mosques continue to spread their propaganda and their venom to promote terrorism.”

He said they would be closed by the interior ministry.

Security officials said one attacker, who had posed as a swimmer but was carrying a rifle under a parasol, started shooting on the beach before entering the Hotel Riu Imperial Marhaba, continuing to shoot.

One British holidaymaker in Sousse, Steve Johnson, told the BBC: “We were just lying on the beach as usual and… we heard what we thought at first was fireworks.

“But it was soon pretty obvious… that it was firearms that were being discharged and people screaming and starting to run.”

IS said it was behind Friday’s attack, identifying the gunman as Abu Yahya al-Qayrawani. Social media accounts close to the group showed pictures of him.

IS had urged followers to step up assaults during the holy Muslim month of Ramadan.

At the scene: BBC’s Rana Jawad

This was a brazen attack that has affected everyone here.

Tourists gathered in the hotel lobby of the Marhaba Imperial consoling each other. Most were thankful they had survived and described a day where they faced their worst fears: not seeing their children again back home or losing a loved one before their eyes.

A woman sat in alone in a corner silently crying with her packed luggage sitting beside her. So many here were frustrated at having to stay at the scene of the attack tonight, but one busload after another took many of the residents away.

These are sobering times for a country, and people now reeling from the effects of deadly attacks on tourists.

But the people of Sousse remain defiant: they are socialising with friends and family, and large parts of the city are still lit up on what is arguably its darkest day yet.

‘He took a bullet for me’

One survivor told the BBC how her fiance, a Welsh tourist, had been shot three times as he used his body as a shield.

“He took a bullet for me,” said Saera Wilson. “I owe him my life because he threw himself in front of me when the shooting started.

“It was the bravest thing I’ve ever known. But I just had to leave him under the sunbed because the shooting just kept on coming.

“I ran back, past bodies on the beach to reach our hotel. It was chaos – there was a body in the hotel pool and it was just full of blood.

The UK Foreign Office said the British embassy in Tunis was sending a crisis team to the area.

“Any British nationals in these hotels or nearby should remain indoors, and contact their tour operator and the Foreign Office,” the FCO said in its updated travel advice.

Many of the tourists in hotels affected by the attack left the country overnight with tour operators arranging special flights to take them home.

Friday’s attack was the deadliest in Tunisia’s recent history. The country has seen militant Islamists gain strength since the overthrow of long-serving ruler Zine al-Abidine Ben Ali in in 2011.

However, neither party has been able effectively to combat Islamist violence – which has been made worse by conflict in neighbouring Libya and by Tunisian fighters returning home after joining Islamist campaigns in Iraq and Syria.