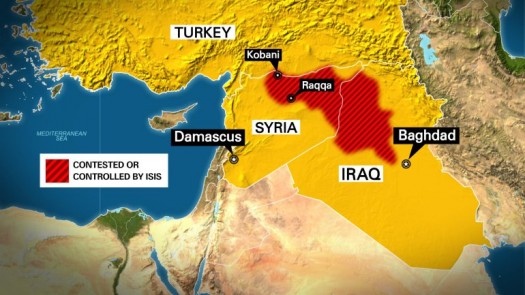 This map highlights the countries of Iraq, Syria and Turkey. Called out are the cities of Mosul and Kobani. The area of ISIS controlled or contested territory is highlighted in red.
Share:

An attack by Islamic State fighters on the Syrian town of Kobani and a nearby village has so far killed at least 146 civilians, the second-biggest massacre by the hardline group in the country, a conflict monitor said on Friday.

Islamic State entered Kobani at the Turkish border on Thursday and clashes have continued with Kurdish YPG forces in the town, also known as Ayn al-Arab, said Rami Abdulrahman, head of the Britain-based Syrian Observatory for Human Rights.

Abdulrahman, who tracks the conflict using sources on the ground, said it was the biggest single massacre of civilians by Islamic State since the killing of hundreds of members of the Sunni Muslim tribe Sheitaat tribe in eastern Syria last year.

The Islamic State’s assault on the Syrian town of Kobani on Turkey’s border is putting Ankara under political fire.

A co-leader of Turkey’s pro-Kurdish HDP, Figen Yüksekdağ, says there is a high probability that Ankara facilitated the attack, claiming it has for years supported the Islamic State.

Turkish officials strongly deny the accusation, saying that such claims are lies and that the latest attack originated from the IS-controlled town of Jarabulus.

Ankara has been voicing growing concern about military gains against IS extremists by the Syrian Kurdish militia of the PYD, which controls Kobani.

Retired Turkish Ambassador Murat Bilhan, vice chairman of the Turkish-Asian Center for Strategic Studies, said Ankara’s concerns center on the Syrian fighters’ suspected links to the PKK, a Kurdish rebel group that has been fighting the Turkish government since 1984.

“PYD is an extension of the PKK — that is the belief in Ankara,” Bilhan said. “So Turkey has legitimate concerns about the PYD’s expansion towards the west, joining the Kurdish belt on the whole south of Turkey, stretching from Iraq into Syria and probably aiming at the Mediterranean.”

Syrian Kurdish forces fighting with elements of the rebel Free Syrian Army, and backed by U.S.-led airstrikes, have recently scored major victories against the Islamic State group. The Syrian Kurdish-led forces are just 50 kilometers from the jihadists’ headquarters in Raqqa.

But earlier this month, Ankara slammed the PYD, accusing its forces of ethnic cleansing and warning that it was watching events closely.

International relations expert Soli Ozel, of Istanbul’s Kadir Has University, said it was unlikely that Turkey would directly intervene, but that the Turkish statement added to Kurdish suspicion.

“And from the [Turkish] government, and from the media very close to the government, come all these remarks that IS is less dangerous than the PKK or PYD, which they see as identical,” Ozel said.

Despite Ankara’s repeated denials that it is facilitating or allowing jihadists to use its territory to enter Syria, it remains under growing pressure from its Western allies.