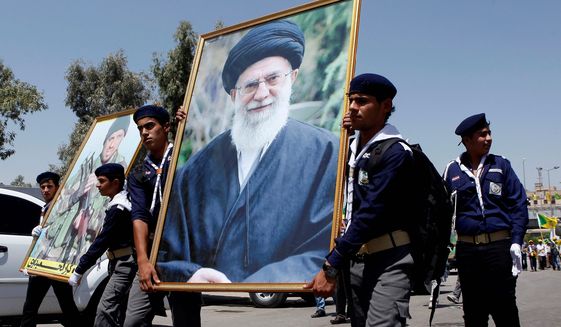 Iranian diplomats have sat down for a series of cordial negotiations with the West over nuclear arms, as all handshakes and smiles were captured in network news photo ops.

On other fronts, Tehran uses a hammer, not a handshake. The Islamic regime continues unabated in its drive to dominate the Middle East and export terrorism, according to a new government report and national security experts.

In fact, Iran is broadening its influence, moving outside the Persian Gulf by sending intelligence operatives into South America and Asia. Such agents typically work to destabilize a regime or to prop up an anti-American one.

In its neighborhood, Tehran’s ruling mullahs routinely violate a United Nations resolution by arming the Lebanese militant group Hezbollah with thousands of missiles. It bolsters Syrian dictator Bashar Assad, who has killed thousands of his citizens. And it trains Iraqi Shiite militiamen, who have committed atrocities against Sunni Muslims in the war against the Islamic State.

Tehran’s undiminished endgame is to dominate all the states that encircle archenemy Israel, while turning the Persian Gulf into an Iranian-regulated waterway. Its top security officials openly talk of world conquest, predicting the Islamic flag one day will fly over Washington, D.C. Iranian parliament members joined in a “Death to America” chant last week.

“Tehran aims to control the entire Middle East, and the ruling mullahs espouse a theological view that leads the regime to world dominance,” said Robert Maginnis, a retired Army officer who is writing a book, “Never Submit,” on world threats such as Iran. “Therefore, the mullahs believe they should use every resource to accomplish dominance, including nuclear intimidation, sectarian fights, terrorism, economic pressure and religious manipulation.”

Iran’s determined agenda comes despite six years of friendly outreach by President Obama in letters and videos, as well as what appear to be amicable talks with Secretary of State John F. Kerry. In the international negotiations over Iran’s contested nuclear program, Mr. Kerry has confined the focus to atomic weapons only, notIran’s militarism.

“Iran would be foolish not to take advantage of what U.S. allies in the region see as the Obama administration’s approach to Iran,” said Simon Henderson, an analyst at the nonprofit Washington Institute.

Its goal? “Its rightful regional hegemony in terms of population size, land mass, hydrocarbon wealth plus respect for Shiites, regarded as second-class [citizens] across much of the Middle East,” Mr. Henderson said.

While Iran fights the Sunni extremist group Islamic State in Iraq — becoming an unspoken, and odd, U.S. ally — its foot soldiers work to dominate the majority Shia Iraqis and thus the country.

Assertions that Iran is on the march do not come solely from administration critics. The State Department’s new report on world terrorism, released June 19, states: “Iran’s state sponsorship of terrorism worldwide remained undiminished.”

Iran’s hammer is the Islamic Revolutionary Guard Corps and its foreign special operations branch, the Quds Force, as well as the Ministry of Intelligence and Lebanese Hezbollah.

The State Department report said these actors “remained a significant threat to the stability of Lebanon and the broader region.”

As a backdrop to Iran’s current interventions, there is still the fact thatIran and the Quds Force became merchants of death — American deaths — in the long Iraq War. Iran imported Iraqi Shiite militiamen and trained them in terrorism, including the building of improvised explosive devices (IEDs) that they then unleashed on American service members.

Iran holds a special place in the realm of terrorism. It is one of only three countries — the others are Sudan and Syria — the U.S. has designated as a state sponsor of terrorism. This means the regime and Supreme Leader Ayatollah Ali Khamenei actively approve and support terrorist attacks abroad.

• Deploys the Quds Force to “provide cover for intelligence operations and create instability in the Middle East.” The Quds Force “is the regime’s primary mechanism for cultivating and supporting terrorists abroad.”

• Provides financing and training “to support the Assad regime’s brutal crackdown that has resulted in the deaths of at least 191,000 people inSyria.”

Gen. Amir Ali Hajizadeh, who heads the Revolutionary Guard Corps aerospace force, said, “The IRGC and Hezbollah are a single apparatus jointed together.”

• Deploys the Quds Force to Africa, Asia and Latin America in a bid to influence political events.

“Iran’s behavior remains unchanged,” said James Russell, an instructor at the Naval Postgraduate School in Monterrey, California, and a former Pentagon official. “This is not surprising. There is no ‘deal’ to readmit Iranto the community of nations.”

Mr. Russell added that once a nuclear deal with Tehran is signed, “I would look for Iran to start a gradual adjustment towards behaviors more consistent with internationally accepted norms. It’s not like flipping a switch, however. It will take time and strategic patience on the part of the international community.”

For now, Iran’s actions and statements show a different track.

A U.S. Army think tank issued a report last spring that said Iran is building an arsenal of “suicide” drones that can be guided into American warships in the Persian Gulf. The regime has a history of trying to disrupt shipping in a bid to one day dominate who can and cannot use the strategic waterway and the all-important Strait of Hormuz, through which nearly one-fifth of the world’s oil production is transported daily.

A U.S. Navy carrier is always in, or close by, the Gulf, much to Iran’s irritation.

“There is little doubt Iran’s mullahs seek a return to those former glory days, as evidenced by its aggressive naval actions throughout the gulf,” Mr. Maginnis said.

The mastermind of the nefarious Quds Force is Gen. Maj. Qassem Suleimani, whom Western leaders concede is a smart strategic thinker. He personally has traveled inside Iraq to supervise how Iran is helping Iraqi Shiites. He justifies his country’s interventions in Lebanon, Syria, Yemen and Iraq.

“We have a clear duty to support them,” he said in a May speech. “We are helping all of them.”

An example of this “support”: The State Department said Iran maintained a massive arms flow to Hezbollah in 2014. Israel now estimates that Hezbollah, which went to war with the Jewish state in 2006, has stockpiled about 100,000 missiles in Lebanon that include long-range rockets that could strike population centers in Israel.Iran also provided anti-aircraft missiles and anti-ship cruise missiles.

Iran also sends rockets to the Palestinian militant group Hamas in the Gaza Strip, from which Israel is attacked with some regularity.

Both Hamas and Hezbollah are U.S.-designated terrorist organizations.

Meanwhile, Gen. Suleimani is putting tremendous resources into supporting Mr. Assad. He has recruited Shiite militiamen from Afghanistan, Pakistan, Iraq and Lebanon to fight in Syria.

According to the Middle East Media Research Institute (MEMRI), Iranian agents are organizing Mr. Assad’s depleted army units, whose numbers have fallen from more than 100,000 to about 70,000 today. There is little doubt that if Iran had not intervened with fresh foreign troops three years ago, Mr. Assad would have fallen, leaving his country to pro-democratic forces and Islamic extremists to fight it out.

A MEMRI report, “Iran Tightens Its Grip on Syria Using Syrian and Foreign Forces,” said Syria essentially has become an Iranian army and intelligence base from which it could attack Israel.

“Some of the Iran-operated Syrian so-called ‘popular resistance groups,’ such as the Syrian Hezbollah, stress that their aim is to operate against Israel, not only against the Syrian opposition,” MEMRI said.