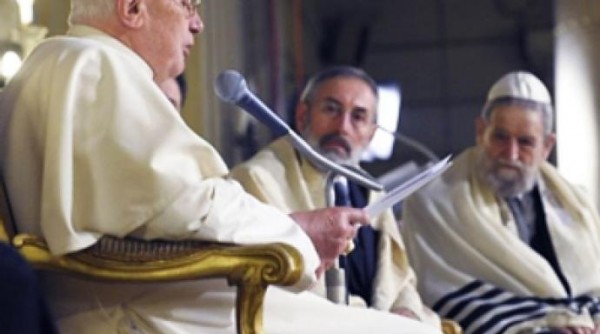 “The Holy Scriptures cannot be used to justify the return of Jews to Israel and the displacement of the Palestinians,” Greek-Melchite Archbishop Cyrille Bustros said at the close of a two-week conference in Rome, Italy, “to justify the occupation by Israel of Palestinian lands.”
Share:
A high-ranking Israeli official on Sunday slammed a statement from Catholic bishops, who called for international organizations to lead the cause of Palestinian statehood.

Greek-Melchite Archbishop Cyrille Bustros sparked an interreligious firestorm when he suggested that Israel was “using Scripture” to continue its occupation of Palestinian territory.

“The Holy Scriptures cannot be used to justify the return of Jews to Israel and the displacement of the Palestinians,” Bustros said at the close of a two-week conference in Rome, Italy, “to justify the occupation by Israel of Palestinian lands.”

The Archbishop then questioned the biblical idea of a “promised land” set aside by a specific group of people.

“We Christians cannot speak of the promised land as an exclusive right for a privileged Jewish people,”Bustros continued. “This promise was nullified by Christ. There is no longer a chosen people – all men and women of all countries have become the chosen people.”

Bustros led the group that drafted the synod’s concluding statement on Israel and the Palestinians.

The controversial comments came at the conclusion of a two-week Vatican conference assembled to discuss the plight of Christians in the Middle East.

Pope Benedict XVI was in attendance at the synod and celebrated Mass in St. Peter’s Cathedral on Sunday with the bishops.

Israel responds
On Sunday, Israeli Deputy Foreign Minister Danny Ayalon criticized the concluding statement of the conference, saying the forum has been “hijacked by an anti-Israeli majority.”

“We express our disappointment that this important synod has become a forum for political attacks on Israel in the best history of Arab propaganda,” Ayalon said in a statement. “The synod was hijacked by an anti-Israel majority.”

Ayalon then called on the Vatican to distance itself from the comments, which the Israeli official said amounted to “libel.”

“Israel cannot use the biblical concept of a promised land or chosen people to justify new settlements in Jerusalem or Israeli territorial claims,” Saeb Erakat, a spokesman for Palestinian Authority President Mahmoud Abbas, said in a statement released Sunday.

Erakat said the synod sent “a clear a message to the government of Israel that it may not claim that Jerusalem is an exclusively Israeli city.”

“The Palestinian people will thus have an independent and sovereign homeland where they can live with dignity and security,” the statement continued optimistically. “The State of Israel will be able to enjoy peace and security within their internationally recognized borders.”

“The Holy City of Jerusalem will be able to acquire its proper status, which respects its particular character, its holiness and the religious patrimony of the three religions: Jewish, Christian and Muslim,” it said. “We hope that the two-state-solution might become a reality and not a dream only.”

Pope Benedict XVI first called for a two-state solution to the Middle East crisis during a visit to the region in May 2009 when he voiced the Vatican’s support of a sovereign Palestinian homeland. At the time, Israeli Prime Minister Benjamin Netanyahu was opposed to a two-state solution.

The Vatican, however, eager to boost its sagging popularity worldwide, noted during the synod that only 2.1 per cent of those living in Israel are Christian, who continue to be outnumbered by high Jewish and Muslim birthrates.

The Catholic Church also mentioned conflict, religious discrimination and economic woes as the cause of its shrinking influence in the Middle East.

No sign of apology
The Vatican in January blamed Israel not only for the exodus of Christians from Palestinian-controlled territories, but for the plight of Christians across the entire Middle East.

The statement, which served as the basis for the latest Vatican synod, was also authored by Arab bishops from the Middle East, who argued that Israel’s “occupation” of Arab-claimed lands is the root cause of most of the oppression suffered by Christians in the region.

They suggested that in the absence of an “occupation,” radical Islamic forces across the Middle East would lose their support base, and stop causing problems for Christians.

The Vatican said they were not trying to take sides in the issue, but that the Arab bishops “know the situation well.”

This is not the first time of late that religious tensions have boiled over between the adherents of Judaism and Christianity.

Cardinal Oscar Andres Rodriguez Meridiaga, the archbishop of Honduras, said there was something curious about the media’s timing of the revelations, coming as they did as the conflict in the Middle East was heating up.

“It certainly makes me think that in a moment in which all the attention of the mass media was focused on the Middle East, all the many injustices done against the Palestinian people, the print media and the TV in the United States became obsessed with sexual scandals that happened 40 years ago, 30 years ago…”

L’Osservatore Romano, the Vatican’s daily newspaper, criticized what it said was a “clear and despicable intention” by the media to strike at Benedict “at any cost.”

American lawyer Alan Dershowitz, a well known defender of Israeli interests, called the Cardinal’s assertions a “cockamamie theory” and “blood libels,” while arguing that much of the criticism (concerning the pedophile cases) “comes from disappointed Catholics.”

Strange how two religions that emerged from the same seed are so committed to dragging each other down at every opportunity.