U.S: The Army is the only legitimate protector of Lebanon against extremism 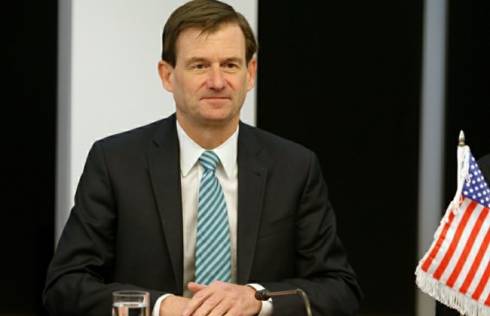 U.S Ambassador  to Lebanon David Hale said Monday that the Lebanese Army and state security institutions  were the only legitimate protectors of Lebanon against extremism.

Hale urged the Lebanese during a reception  marking US independence to remain committed to their state institutions, “which are so much stronger than the false ideology of extremism,” and to stand by their Army and security services.

“Those institutions, after all, alone have the legitimate role of defending the state and its borders, and are accountable to all the Lebanese people,” Hale stressed

The ambassador added that extremist groups from across the border in Syria seek to sow seeds of hate, divide the Lebanese people, and destroy shared values of mutual respect and understanding.

Hale highlighted that the United States and the international community were committed to helping Lebanon by contributing to the Army’s means to defend it.

The ambassador provided a breakdown of aid packages and grants allotted to Lebanon, among which is $83 million donated since last August to the Army to protect borders and safeguard Lebanese citizens.

In addition, the U.S. gave $70 million this past year to deliver clean water and support high-quality education, and almost $800 million was earmarked since 2012 to help Lebanon and local communities cope with the burden of Syrian refugees. “These are just a few examples of how my government supports Lebanon at a time of stress,” he said.

Hale saluted the long-standing ties and strength of the Lebanese-American relationship.

He explained that it is a relationship that stretches back before the U.S.’ independence, when merchant ships from Boston, Massachusetts, visited Beirut’s port to do business.

Hale added that ties stretched back to the early 19th century, when American educators and missionaries came to Beirut and Mount Lebanon, a presence that led to the founding “of several great American-Lebanese universities and high schools that flourish today.”

Hale noted that the relations deepened with the arrival of Lebanese immigrants to the United States, searching for new opportunities as America and its economy grew.

“Their descendants, proud Americans of Lebanese origin, have contributed so much to the development of America, and I salute those here tonight. Many helped fund this event,” Hale said.

Hale said America and Lebanon have deep bonds of friendship, business, culture and education. “These bonds are enduring because they spring from the commitments and effort of private Americans and private Lebanese,” he added.

“But my government is proud to support these relationships through robust assistance and cultural and educational exchange programs that benefit Lebanese from all parts of Lebanon and all walks of life.”