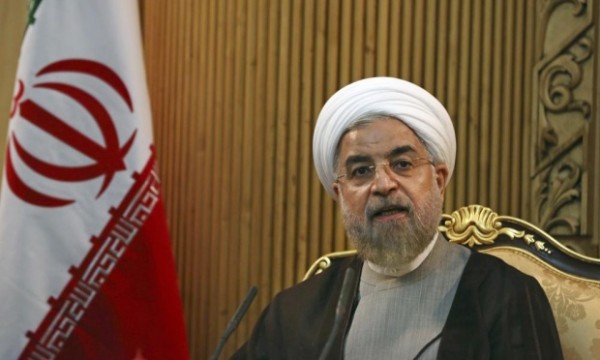 Speaking at a televised rally in the northeastern city of Bojnord, to mark the second anniversary of his 2013 election victory, Rouhani used sweeping rhetoric to play up the benefits of easing Iran’s long international isolation.

“With the guidance of the Supreme Leader and the support of the people, we will enrich both uranium and the economy in Iran,” he told a crowd of thousands.

“We want the nation to be happy and productive, to have a bright economy and social welfare — and to have centrifuges too.”

While Iran’s negotiating team has crisscrossed the globe trying to seal a nuclear deal, Rouhani in recent months has spent much of his time in provincial cities selling the nuclear talks to a population that harbors deep mistrust of the West.

“We will go to the United Nations, where the sanctions against us were written, and there we will have them lifted,” he said, portraying the progress in nuclear talks as a diplomatic victory for the Islamic Republic.

Iran is aiming to strike an accord with six powers by June 30 that would secure sanctions relief in exchange for some curtailment of its nuclear program, but the negotiators have faced criticism from conservatives who say they are making too many concessions.

Rouhani has aimed to portray such critics as out of touch with the daily reality faced by Iranians under sanctions.

“Those who say sanctions are not important don’t know what is happening in people’s pockets,” he said, alluding to the high cost of foreign-made goods.

Following the pattern of his previous provincial speeches, the president said his government had taken steps on issues including healthcare, food security and the environment, arguing that lifting sanctions would lead to more progress.

On Saturday, at a news conference also marking the anniversary of his election, he was more measured about the prospects for the talks, warning that a deal could be delayed if world powers brought new issues into play.

He also said it could take weeks or months for sanctions to be lifted after reaching a deal — comments notably absent from his soaring rhetoric to the cheering crowd in Bojnord.