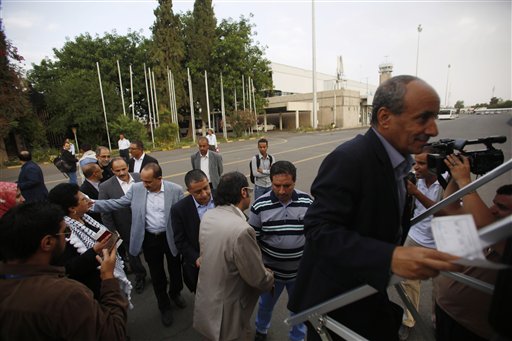 Yemeni political groups, including Shiite rebels known as Houthis, gather to get on an airplane for Geneva for U.N.-led peace talks at the airport in Sanaa, Yemen, Sunday, June 14, 2015. The talks are slated to be first substantive meetings by all parties involved in the conflict. (AP Photo/Hani Mohammed)
Share:
Yemeni political groups, including the Shiite rebels known as Houthis, departed from the airport in the capital, Sanaa, on Sunday, to travel to Geneva for U.N.-led peace talks, officials said.

Abdulmalik Agra, a member of the rebels’ political council, told The Associated Press that its group included a Houthi leader, Mehdi Mashat, official Ali Hamza al-Houthi, and three others — including men from the party of former President Ali Abdullah Saleh, a rebel ally.

They decided to attend the talks after the United Nations agreed to broaden the structure so they were not based solely on two warring sides. Members of the Socialist and Haqq parties were also joining.

A day earlier, a plane meant to carry the rebels and their allies to the talks left Yemen without the delegates on board, casting doubt on whether the meetings would go forward as planned. The talks are slated to be first substantive meetings by all parties involved in the conflict.

Security officials, who spoke on condition of anonymity because they were not authorized to brief journalists, said that Saudi-led airstrikes against the rebels and their allies continued in several Yemeni provinces, including Aden, Taiz, Saada and Hodeida.

Violent clashes continued in Marib province, while rebel forces took control of al-Jawf province after clashes with tribesmen loyal to Hadi, prompting the coalition to launch airstrikes against them.

Meanwhile, thousands of Houthi supporters marched in Sanaa in protest of the war and what they described as the siege of the city.